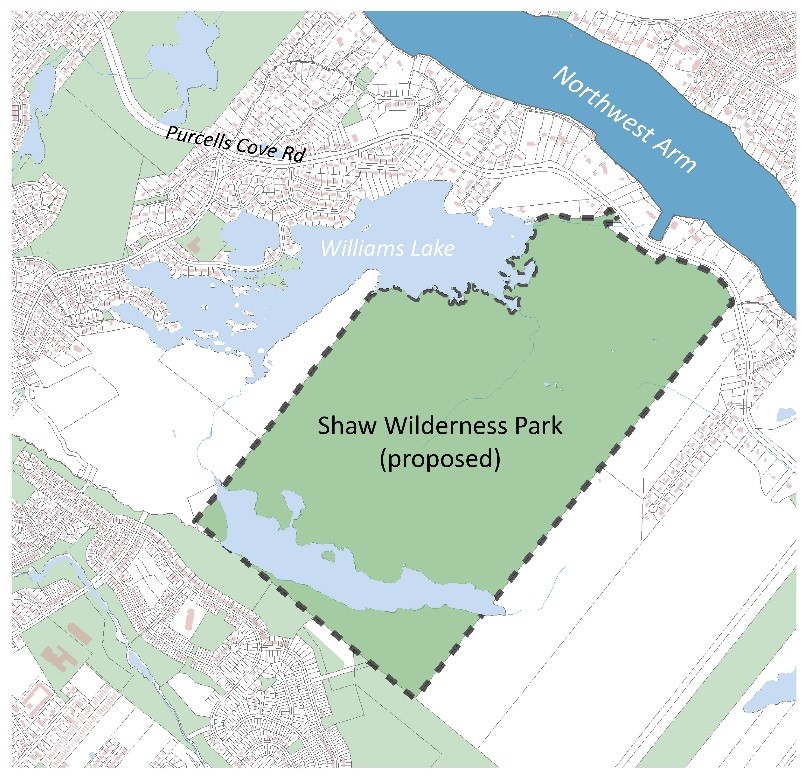 Halifax Regional Council has tentatively agreed to purchase lands from Clayton Developments (Shaw Group) and enter into a conservation easement agreement with the Nature Conservancy of Canada (NCC) to establish a wilderness park in the Williams Lake area of Halifax.

The agreement is subject to a number of conditions, such as public consultation, the development of a suitable park entrance, and NCC fundraising.

The lands are recognized for their natural attributes, which include rare vegetation and important habitats. They also have historical/cultural values and are already used for recreational purposes, including hiking and access to Williams Lake.

Details of the Proposal

The purpose of the meeting was to receive feedback regarding the proposal to establish the park. Parks and Recreation staff were present to provide an overview. Minutes from the meeting will be included in a staff report to Regional Council.

As noted above, there are a number of conditions that needs to be fulfilled before Regional Council agrees to purchase the lands. One of these is the requirement for public hearing. Further to this, the following notice has been given:

Regional Council intends to consider and if deemed advisable, approve the sale of a conservation easement at less than market value to the Nature Conservancy of Canada. This is part of a proposal for Halifax Regional Municipality to acquire the lands of Clayton Developments Limited to establish a park to be named Shaw Wilderness Park. Under this arrangement, Halifax Regional Municipality will acquire the lands for $6,600,000. The Nature Conservancy of Canada will subsequently pay the municipality $2,500,000 in exchange for a conservation easement being applied to the lands, which will serve to help protect its ecological values and limit activities to those which are consistent with a wilderness park, such as hiking and nature appreciation, in perpetuity. The municipality recognizes the value of the conservation easement as $3,300,000. The sale at $2,500,000 to a non-profit organization is a less than market value that requires a public hearing pursuant section 63 (1) Halifax Regional Municipality Charter.

For further information about the proposal, please contact Richard Harvey, Manager of Policy and Planning, Parks and Recreation: