Interested in running in the 2020 Municipal or Conseil scolaire acadien provincial Election? The next regular election will be held October 17, 2020. Here you will find information on requirements, official forms and more.

Click on the image below for a 30-minute information session, which will provide important details you will need to Become a Municipal Candidate. 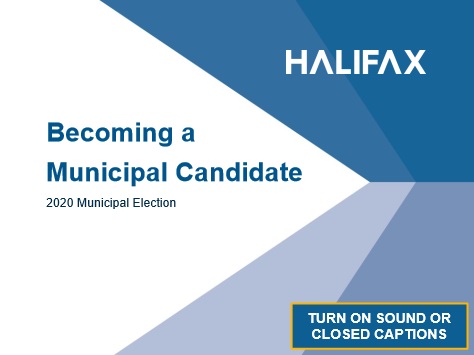 You can also download the Municipal Affairs Candidate’s Guide for the 2020 Regular Election in English and in French [PDF].

Visit www.yourdecision.ca to learn about workshops designed for potential candidates and registered candidates in the upcoming municipal election. Topics include organizing an effective campaign, what it’s like to be an elected official, and why people should get involved in their local governments. Registration is required for these sessions, so be sure to visit the website and sign up today.

The Nova Scotia Status of Women office has produced campaign support materials for women interested in running in an election. Visit https://women.novascotia.ca/publications-resources/women-leadership for more information.

To be a candidate in either a municipal or school board election, you must be:

You don’t need to live in the polling district that you’re running in, as long as you meet the residency requirement of six months in the municipality.

Do you want to book an appointment to appoint your official agent? Contact Trish Smith, Election Coordinator to book  your "Form 17" appointment.  Due to COVID-19, these appointments will be carried out through a virtual meeting which will allow Election staff to witness the signature of the Official Agent in keeping with the legislation.

Running for office means you are held to the same standards of accountability and transparency as the rest of the Halifax Regional Municipality. This has a direct impact on raising funds for your campaign.

Council passed updates to the By-law C-1100, the Campaign Finance By-law on July 16, 2019 [PDF]. This By-law works in concert with the campaign provisions in sections 49a and 49B of the Municipal Elections Act. School Board candidates are exempt from this By-law. For a summary of the By-law read the Election Campaign Finance Pamphlet [PDF].

Due to COVID-19, the Election Office is closed.

We continue to serve the public remotely.