Understanding the relationship between air and surface temperatures, current conditions, weather forecasts and chemical processes is key to maximizing the effectiveness of salt. The Halifax region has many distinct micro-climates which affect the speed and effectiveness of salt use.

Salt needs time, temperature and moisture to work. It draws the heat required either from the air or the roadway surface.

Sodium Chloride is a chemical made up of sodium and chloride ions held together by a chemical bond. Heat and moisture is required to break this chemical bond allowing the separate sodium and chloride ions to go into a solution. This solution depresses the point at which water will freeze. As it melts snow, it creates more moisture and forms brine across a roadway. This prevents new snow from packing on the roadway and stays in a "slushy" state until it can be ploughed off mechanically.

It takes eight times more salt to de-ice as opposed to anti–ice. It’s far easier, and less costly, to prevent the ice and snow pack from forming on the travelled way than to remove it afterwards.

These are systems that spray a 23 per cent brine solution on dry salt as it is being discharged from the truck.

Our tandem and five-ton single axle trucks all have pre-wet systems on them. Each truck has a capacity of approximately 500 litres for brine. 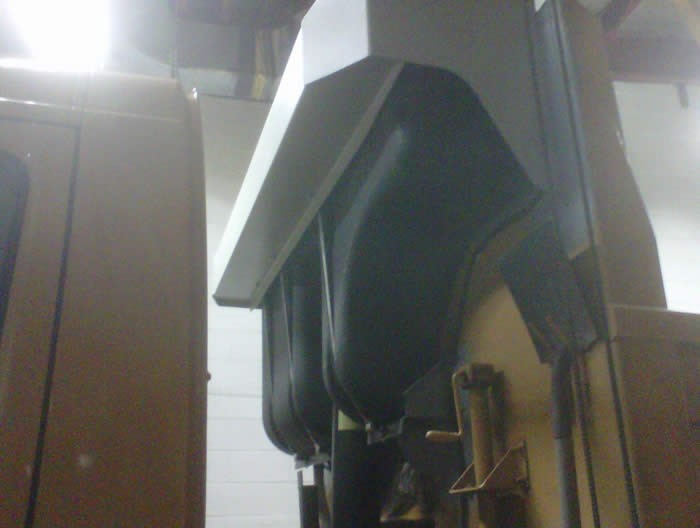 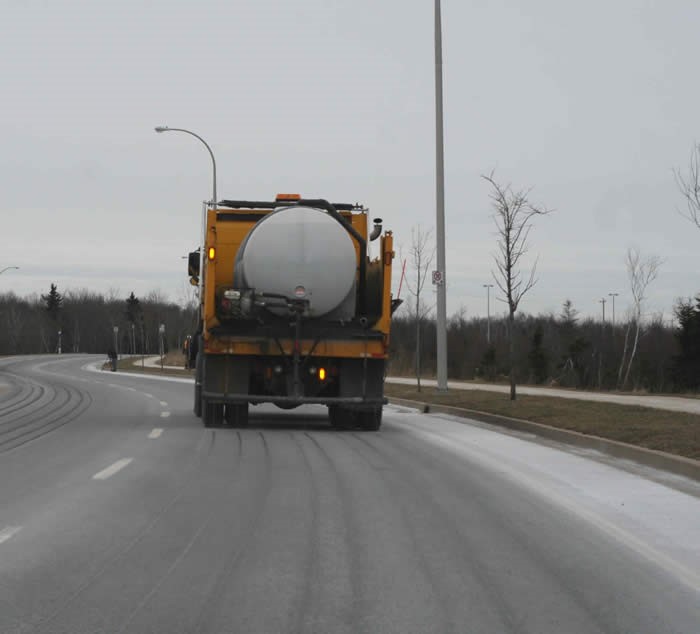 (1)  By spraying brine onto the salt, this gives the salt a boost in moisture content that speeds up the formation of brine as it mixes with the snow. At lower temperatures, snow contains less moisture and it can take a longer time to start the chemical process.

(2)  Pre-wet salt sticks better to the roadway. This is especially important at the beginning of a weather event when the municipality salts the roadway ahead of the snowfall as part of the anti-icing strategy. Dry salt will very quickly be scattered to the curbs with traffic action and wind. Pre-wet salt stays in the roadway longer.

One of the tools used for preventive maintenance is Direct Liquid Application (DLA). This is where brine (23 per cent salt solution) is sprayed directly on the road surface before a snow event or a risk of frost. The water evaporates leaving the salt residue in the tiny cracks and surface of the roadway. Once snow falls, it mixes with this residue creating brine which spreads across the road surface and prevents the formation of ice. It’s interesting to note that once the water evaporates, the sodium chloride crystalizes on the road surface leaving a white residue which appears to look like a significant amount of salt has been used – when, in fact, much less has been applied by using brine rather than road salt. The appearance can be deceiving.

DLA is a practice used before snow events or in the latter stages when roadways are clear, but wet and may risk freezing up due to dropping air and surface temperatures. It is not effective during snow events when the dry salt is more effective in creating the brine as it mixes with the snow. It can also be used up to 48 hours in advance, to target areas that are prone to early morning frost conditions particularly during the early and late “shoulder” seasons.

As an example, to apply a light application of salt, prior to a snow event on all of the municipality's 3,800 lane km, it would take 361 tonnes of salt at a 95 kg/ lane km rate (lane km is a 3.5m-wide single lane). By comparison, using DLA to pre-treat the same amount of lane km’s would take 76 tonnes of salt to make enough brine to achieve this.

No one strategy covers all the scenarios in any given storm. Depending on the frost depth, weather forecast, current conditions, temperature trends and time of year, each snow event is approached a little differently. Generally, salting is done in early morning to take advantage of rising air and surface temperatures and traffic to help spread the salt and create brine.

The following table illustrates the impact of temperature on the effectiveness of salt.

While some of the principles of salt management apply to sidewalks, there are some significant differences. Because sidewalks don’t have the advantage of vehicle traffic, the salt applied doesn’t get moved around to create the necessary brine. An individual salt grain will melt some snow around it, but then stops working because there is insufficient moisture to continue the process. Therefore, more salt is required per square meter than a roadway to achieve the same result. In addition, once there have been a few plowing events, the edges of the sidewalk form a dam from the plow curl, not allowing the excess water to drain off. This of course will re-freeze causing more ice. It should also be noted that there are no storm water drainage systems along sidewalks (only along the roadways where the curb meets the street) and this causes melting snow/ ice and rainfall to flood between snowbanks and potentially re-freeze.

If you’ve been frustrated with the amount of effort required to clear your driveway or walkway, try putting some salt or other de-icer down prior to a forecasted snowfall.

For general inquiries or to report issues with snow clearing once the service timelines have expired: