With the approaching centenary of the Halifax Explosion (2017), the Halifax Regional Municipality commissioned Ekistics to craft a long-range vision and design concept [PDF] for Fort Needham Memorial Park.. The team was tasked with balancing the needs of the local  community and objectives for improving the community park while significantly enhancing the memorial capacity of Fort Needham as an important regional park destination for the City, Province and Nation.

Approved Council report for the master plan from October 27, 2015

For information on visiting the park, check out the park website. 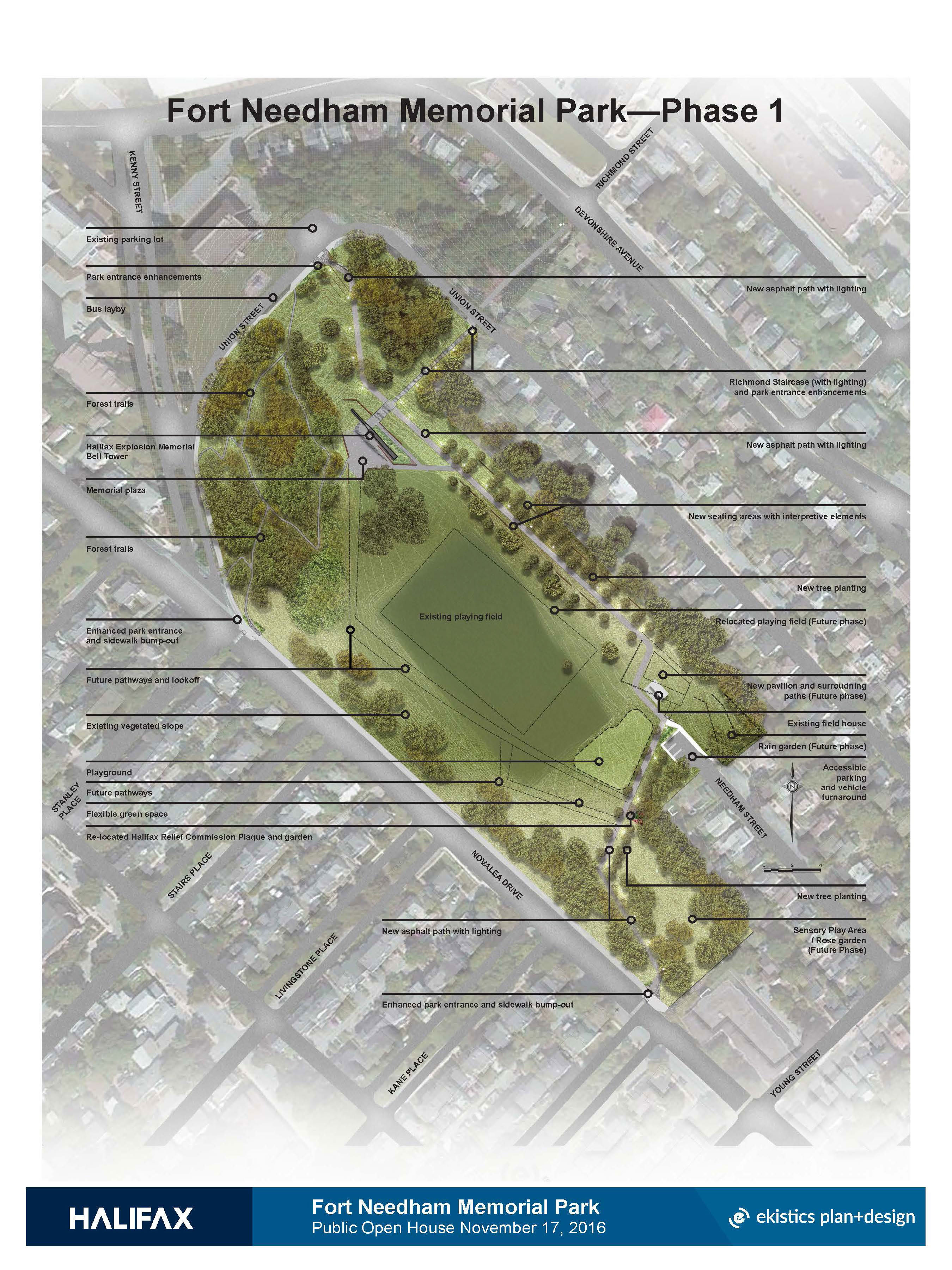 FAQs
What is Fort Needham Memorial Park?
Why is the park important to the event of the Halifax Explosion?
Why is the municipality making improvements to the park now?
What is going to be built next year?
What is the timing for the project?
Will the park be closed during construction?
Will I still be able to let my dog off-leash in the park?
Will the existing community garden be moved for tour buses?
Are the existing wooded areas being kept? Will any trees be cut down?
Why does the master plan recommend removing the tennis courts?

Q. What is Fort Needham Memorial Park?
A. Fort Needham is a Memorial Park that was established by the Halifax Relief Commission in remembrance of the victims of the 1917 Halifax Explosion. It was deeded to the City of Halifax in 1942 and a park was built with the condition that it be used as a public park forever.
This 15.6 acre park is one of the largest public open spaces in the north end of the Halifax peninsula. In addition to its commemorative function, it is an active park providing recreation and green space for local residents from the surrounding neighbourhoods.

Q. Why is the park important to the event of the Halifax Explosion?
A. The 1917 Halifax Explosion was a maritime disaster that left the neighbourhood of Richmond completely devastated. It took massive efforts to rebuild the area into the thriving community we see today. Thomas Adam’s plan for the redevelopment of the area identified the former Fort Needham military grounds as a hilltop public park with magnificent views that overlook the resurrected neighbourhood, the Hydrostone District, the harbour, and rest of the city.

Our most notable monument to this grave event is the Halifax Explosion Memorial Bell Tower in Fort Needham Memorial Park. Every year on December 6th, people gather in the park to hear the ringing of the memorial bells, and to remember the victims of the disaster.

Q. Why is the municipality making improvements to the park now?
A. With the upcoming 100th Anniversary of the Halifax Explosion in 2017, this is an opportunity to refresh the park to improve the grounds for the centennial commemoration, and reflect the diversity of current community needs and interests. The project entails memorial and interpretive elements to better present the Explosion story to residents and visitors, and park upgrades to prepare the site for the anniversary event.

Rededication and improvements to Fort Needham Memorial Park will be the legacy component of the municipality’s 100th Anniversary Commemoration Plan which also includes an enhanced civic commemorative event, and a community grants program.
Revitalizing the park for people to actively use and enjoy today and in the future will be our recognition of the spirit of a community rescued, reimagined and rebuilt.

Q. What is going to be built?
A. The project has approved funding from Regional Council and through the Building Commuinties through Arts and Heritage Program of Canadian Heritage for $2.7 million.

The construction work for includes:

Q. What is the timing for the project?
A. Substantial completion of the project is expected in the fall of 2017. On December 6th, 2017 the park will host an enhanced commemoration ceremony to mark the 100th Anniversary of the Halifax Explosion.

Q. Will the park be closed during construction?
A. No, we do not anticipate having to close the entire park during the construction. For public safety, the areas under construction will be fenced off as required.

Q. Will I still be able to let my dog off-leash in the park?
A. Yes. The off-leash dog program will still operate as it does now. The only change will be a modification to the boundary of the designated off-leash dog area to move it away from the new plaza around the Halifax Explosion Bell Tower.

Q. Are the existing wooded areas being kept? Will any trees be cut down?
A. The wooded areas in the north area of the park will be kept. A forest trail will be built and some selective clearing will be done to make the area easier and safer to access.

An arboricultural review has been done to assess the condition of the trees in the park. Review recommendations are for tree protection measures and selective removals, and pruning/thinning to remove diseased and hazard trees, weed out invasive species to promote healthy growth of native trees, and align with the design intent for the park improvements. Through this project, new trees will be planted with an emphasis on appropriate and native species suitable for the site.

In the long term, as existing community facilities near the park are being planned for re investment, there will be an opportunity to look at developing sports courts that are sited with better access, lighting, street presence, and better connection to supporting recreation infrastructure.

The municipality has received a petition to retain the tennis courts. This is a matter that is being considered but it will mean a smaller area available for the proposed playground and the fenced courts will block some of the new pathways that are planned. Options will be discussed at the public open house and will help inform a staff report regarding the petition and the proposal to remove the courts.