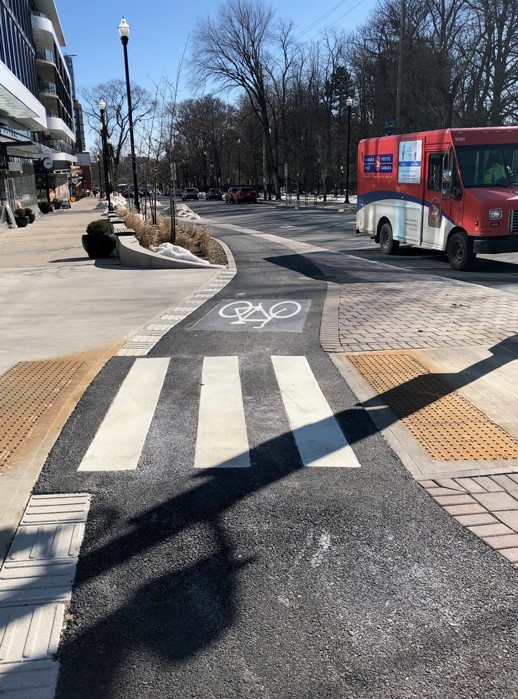 The Halifax Regional Municipality is committed to connecting people to destinations via cycling and to making cycling accessible for people of all ages and abilities.

The Regional Centre All-Ages-And-Abilities (AAA) Cycling Network is being built as a comfortable, convenient network of cycling routes to provide people with more transportation options. The implementation of this network is being funded by the federal, provincial and municipal governments through the Investing in Canada Infrastructure Program.

Below is an update on the current status of several AAA bikeway projects aimed at transforming your daily commute, your trip to the grocery store, or your family’s Sunday ride.

Construction for Phase 2 (Spring Garden Road to Sackville) is now complete. The South Park Street 'AAA' facility features one-way protected bicycle lanes on each side of the street, with a wide buffer and concrete curbs to separate bicycle and vehicle traffic and parking. This route will eventually connect to other planned bicycle corridors, including a new facility on University Avenue/Morris Street and enhanced bicycle lanes on Bell Road.

For more information about the South Park Street AAA Bikeway, click here.  To read the staff report on the project, click here.

Phase Two of the project is now complete and includes installation of signals to facilitate the skewed crossing of Coburg Street.  For more information about the Vernon/Seymour Local Street Bikeway, click here. To read the staff report on the project, click here.

Construction of Phase One on Allan Street (east of the intersection at Harvard Street) was complete summer 2019. Features include:

Construction of Phase Two is scheduled to take place summer 2021 and will involve improvements to the intersection of Allan, Oak, and Oxford Streets. A pedestrian and bicycle activated half signal will be installed to improve safety and convenience for users cycling along this corridor. Signed turn restrictions are being considered to reduce the number of vehicles using this corridor as a shortcut alternative to Quinpool and Chebucto roads. Stay tuned for more details in a resident letter this spring!

Design for the bikeway section on Oak Street between Oxford and Connaught is currently underway. Staff are pursuing opportunities to incorporate traffic calming measures (e.g. speed humps) to the construction happening this summer. However, this is to be confirmed. A targeted neighbourhood engagement is planned for Spring 2021 regarding these potential improvements.

Construction is complete for this route. To create an all-ages-and-abilities connection on this street, as part of a larger network, a portion of the sidewalk along Ahern Avenue has been transformed into a multi-use pathway for use by people walking and cycling.

The Barrington Greenway was extended between North Street and Niobe Gate In addition to the multi-use pathway, the project upgraded the sidewalk on the west side of the street and added transit priority measures for buses traveling southbound on Barrington Street. For the full staff report on the project, click here.

In fall 2018, the municipality completed 1.2km of new multi-use pathway and new sidewalk in Woodside. The new facilities connect communities such as Portland Hills and Russell Lake to destinations in Woodside, the Woodside Ferry Terminal and continuing along the Dartmouth Harbourfront Greenway into downtown Dartmouth.  This is a new segment of the Regional Centre AAA Cycling Network that also includes new sidewalks and makes Halifax Transit stops accessible.

The Halifax Urban Greenway is a corridor that will connect the Chain of Lakes Trail to Point Pleasant Park through the west side of the Halifax Peninsula. Phase One was completed on Beaufort Ave in 2010. This next phase aims to extend the existing pathway northward as far as Jubilee Road (via Conrose Park) and southward to connect to Point Pleasant Park.

Public engagement related to Phase Two of HUG implementation was completed in Summer 2019.  The Municipality is currently working on the detailed design and options for implementation of this next phase which includes some property negotiations. To learn more about this project, click here.

Planning is currently underway for developing a AAA bicycle facility on Almon Street from Windsor Street to Gottingen Street. Staff will take a recommended functional plan to Regional Council in 2021.

When this project began, some options were presented to the public for feedback. After receiving over 500 comments from the public via the public meeting, online survey responses, and individual communications, municipal staff decided to delay a recommendation to Regional Council so that additional options for a protected bicycle lane could be explored. For more information about the design options being proposed and to read the What We Heard Report, click here.

The Macdonald Bridge Bikeway provides a key connection for cycling between Halifax, Dartmouth, and beyond. Accessing the bikeway from either side of the harbour, however, can be challenging for many. Some of the current challenges include long, steep climbs and busy streets and intersections approaching the Macdonald Bridge. The municipality wants to make it possible for people of all ages and abilities to access the Macdonald Bridge Bikeway. To improve this crucial connection, the Bridge Bikeway Connector project includes a flyover ramp from North Street to the bridge, 3.5 km of bicycle facilities on North Street and Wyse Road, and safety improvements at intersections on both the Halifax and Dartmouth sides of the bridge.

In September 2020, Council approved implementation of:

These approved connections will mostly take the form of local street bikeways where bikes and cars share the road on streets with low traffic volumes and speeds. Treatments to make the bikeways safer may include traffic calming, traffic diversion and treatments to facilitate the crossing of major streets. However, some parts of the proposed route may require protected bike lanes or multi-use pathways to make the connection. Implementation is being phased, with the first segments to be constructed in 2021.

Construction is scheduled to begin on Leaman Street, Drummond Court, and Isleville Street north of Duffus in Summer 2021. Alongside road resurfacing, the bikeway treatments being installed for this segment include:

Phase Two of the North End AAA Bikeway between Almon Street and Cogswell Street is currently on hold until in-person public engagement events can be held.  This will give the community an opportunity to shape their vision for the street that improves road safety of all users.  The resulting functional (30%) designs will be presented to Regional Council for approval prior to implementation in the coming years.

The municipality is developing a planning study to determine the best connections for walking and cycling between the Africville National Historic Site and the rest of the Halifax peninsula, with a focus on creating safer ways to access the site for everyone.

Concept options are being developed for this project with engagement happening in summer and fall of 2021. Find more information here.

The Bayers Lake Business Park Active Transportation Functional Plan project aims to create a functional plan to help guide the municipality in what AT facilities to consider building as these streets are rehabilitated over the next 10 years.

The Bayers Road Transit Priority project includes a multi-use pathway. With this project, there will eventually be a connection between to the Chain of Lakes Trail and the Halifax peninsula.

As part of the Cogswell District project, AAA bikeways are being planned for Barrington and Cogswell. To find out more about one of the biggest city-building projects in the history of Halifax, click here.