The Street Improvement Pilot projects will include the installation of temporary features designed to improve the safety and comfort of those walking, rolling, cycling and driving.

The Integrated Mobility Program (IMP) creates a vision for moving around the Halifax region and helps direct future investment in transportation demand management, transit, active transportation, and the roadway network by improving the links between residents and their communities.

The IMP supports the use of pilot projects to test new street design and placemaking strategies to improve the safety and comfort of pedestrians. These pilot projects allow the municipality to roll out temporary improvements quickly and at a lower cost. These enhancements are also referred to as "tactical urbanism."

Project sites are selected and designed in-house by Planning and Development staff, in collaboration with other business units including Transportation and Public Works (TPW), Halifax Transit and Parks and Recreation. Where possible, partnerships with local Business Improvement Districts (BIDs) may be sought.

Do you have feedback or questions about any of the projects? Please call 311 or send us an email.

Here are some examples of street improvement pilot projects in our region:

Additionally, this design closes the slip lane at the intersection of Brunswick Street and Duke Street, improving the safety of cyclists and pedestrians trying to cross that intersection. Bollards within the closed slip lane will further delineate the pedestrian waiting area, further reducing any potential conflict.

Cyclists should dismount and cross the street to enter the facility heading up Gottingen Street.

3. Lower Water Street Tactical Bikeway: The addition of bollards and planters in a painted buffer upgrades the current bicycle lane on Lower Water into a tactical protected bicycle lane and extends it to the Cogswell Interchange. Green pavement markings will highlight areas of potential conflict at bus stops, intersections and busy driveways.

If you are cycling in this area, you can expect: Safer, more comfortable cycling experience with the addition of protection in the form of planters and bollards. A green two-stage turn box will accommodate two-stage left turns onto Duke Street for cyclists.

If you are driving in this area, you can expect: Removal of some loading space on the east (bicycle lane) side of the street.

Temporary curb extensions will be installed at the following intersections:

Curb extensions reduce the width of the road by extending the curb into the roadway. These features are intended to improve safety for all road users by decreasing vehicular speeds, reducing pedestrian crossing distances, and improving sightlines for those driving.

These features are expected to remain in place until at least the winter of 2021. 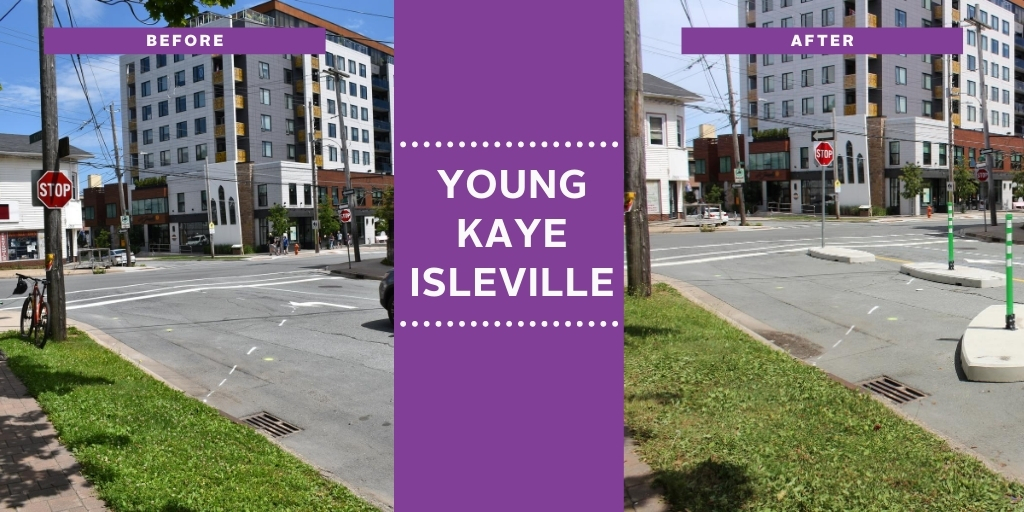 5. Young, Kaye and Isleville Intersection Street Improvement Pilot Project:
Complementing the ‘Slow Street’ initiative and the future North End All Ages and Abilities (AAA) Bikeway (pending Council approval), the municipality has installed a pilot project which brings a temporary raised median closure, back-in angle parking, and curb extensions to the intersection of Young, Kaye, and Isleville. These installations aim to improve safety for those walking, rolling and cycling.

A temporary raised median was installed at the intersection of Young and Isleville streets to facilitate a safer crossing for those walking, rolling and cycling. This measure also serves to calm traffic on either side of Isleville.

The raised median will reduce the overall crossing distance for those walking, rolling and cycling and allow the intersection to be crossed one lane at a time.  A small central passage allows those on bicycles, as well as emergency vehicles, to continue to travel through the intersection.

The existing parallel parking spaces on the south side of the street will remain in place.

The new, angled parking design is safer and more efficient for pedestrians, drivers and cyclists.

Curb extensions were installed on Kaye Street at the intersections of Gottingen and Isleville streets.

Curb extensions reduce the width of the road by extending the curb into the roadway. These features are intended to improve safety for all road users by decreasing vehicular speeds, reducing pedestrian crossing distances, and improving sightlines for those driving.

These temporary measures are anticipated to be in place until at least the Winter of 2021. Residents are encouraged to visit Shape Your City Halifax to share feedback. Alternatively, residents can call 311 or email their feedback. View more information on this pilot project.

6.    Corner of Wentworth Street & Ochterloney Street (downtown Dartmouth): Phase 2 includes the replacement of jersey barriers with bollards at the south corner where the streets intersect. This was done to reduce the pedestrian crossing distance as well as the likelihood of illegal parking near the crosswalk.

7.    Coburg Road & Edward Street:  This pilot project resulted in permanent change. The original request was to review the intersection angle and pedestrian crossing distance along the side of St. Andrews Church.  As a pilot project, the intersection was realigned and narrowed with temporary concrete barriers. After a trial period and engagement with the church this became a permanent change.

8.    Agricola Street:  Bollards have been installed to improve pedestrian safety by reducing the pedestrian crossing distance. 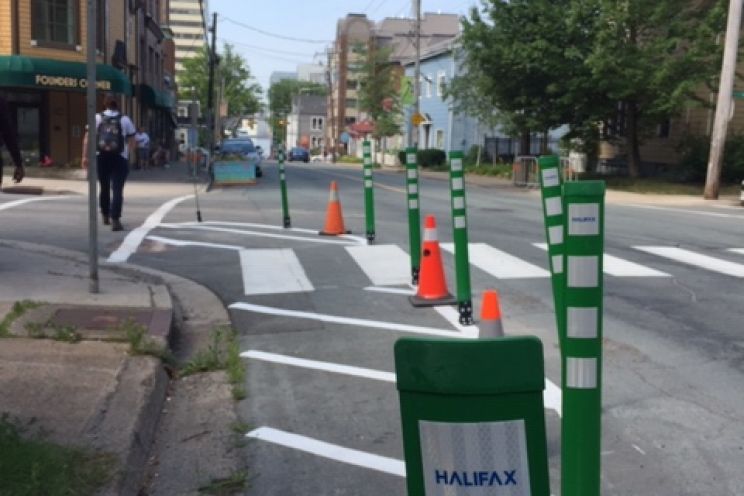 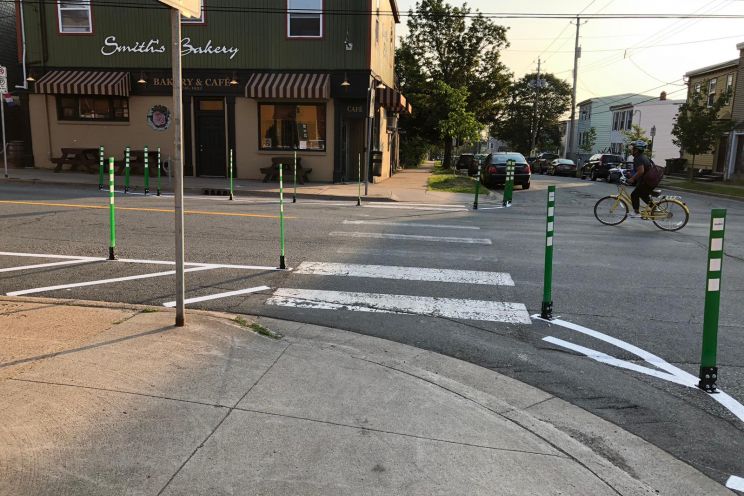 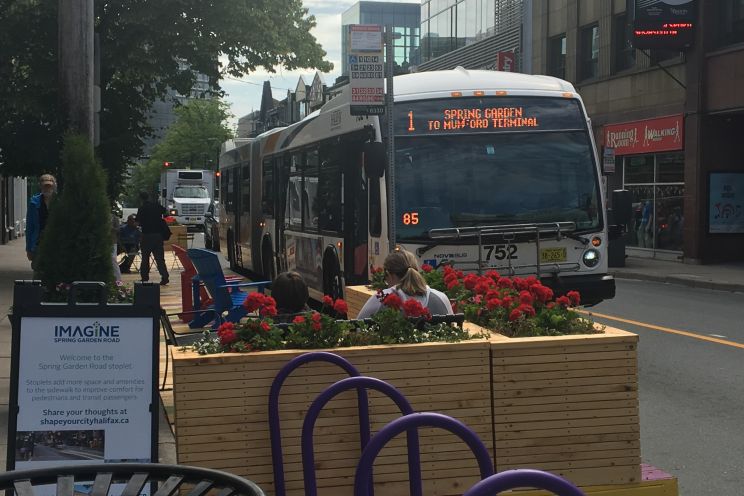 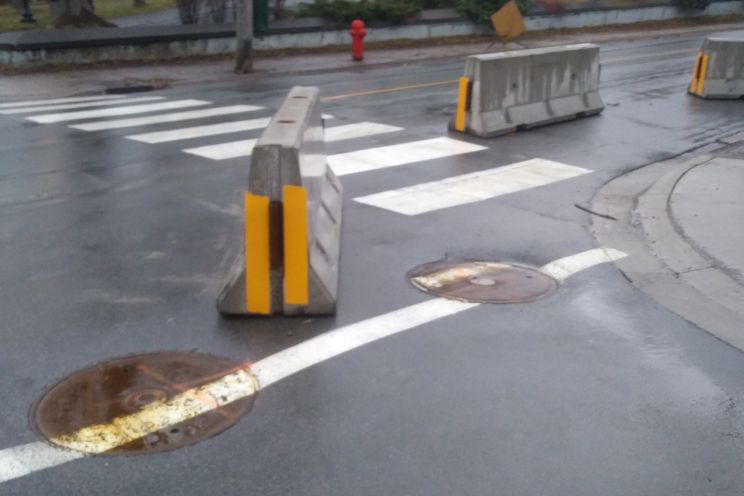 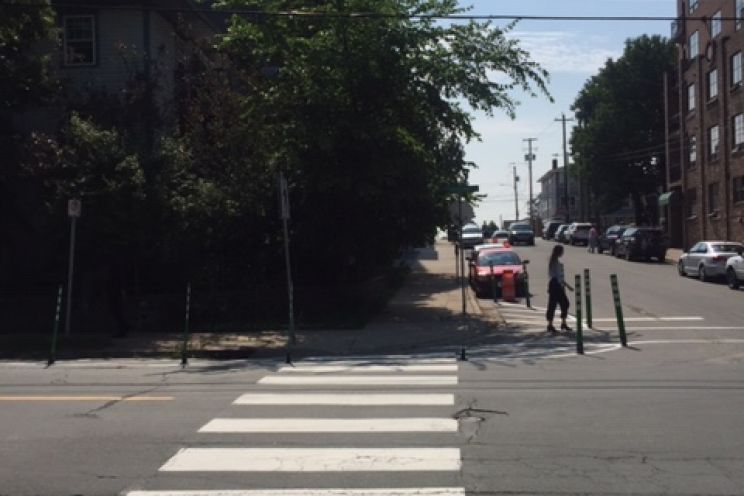 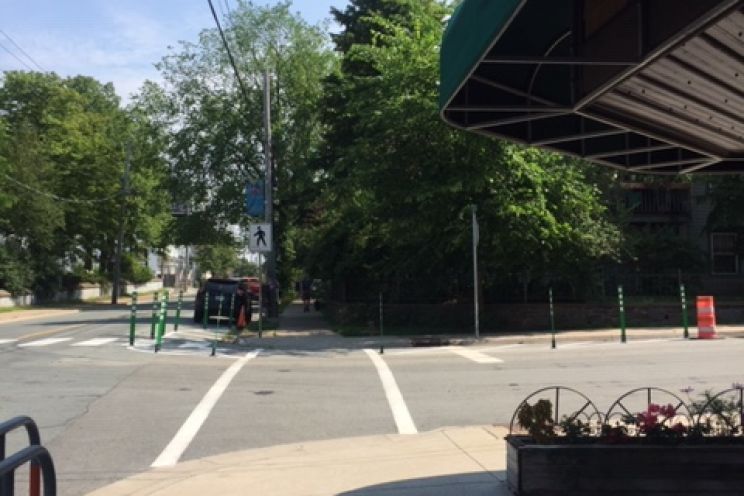 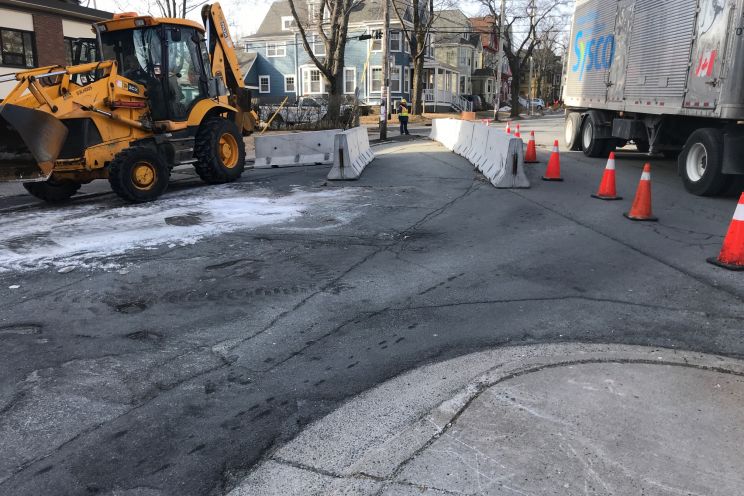 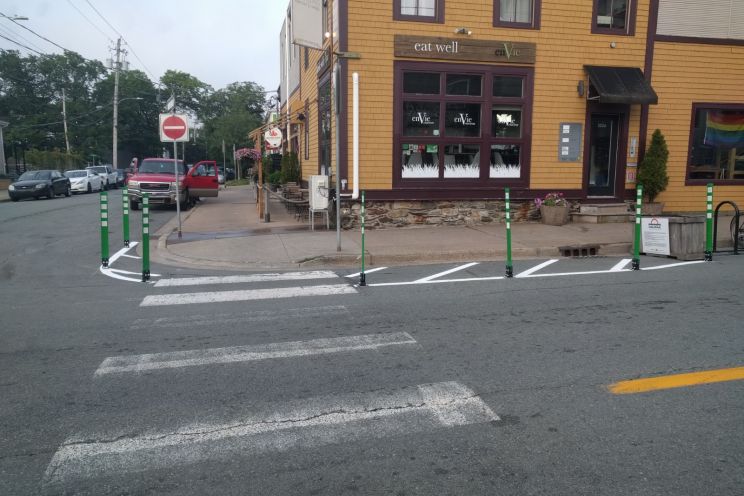 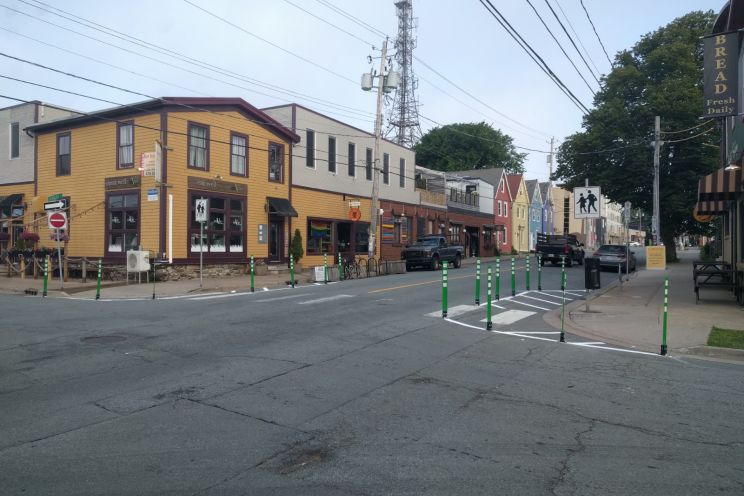