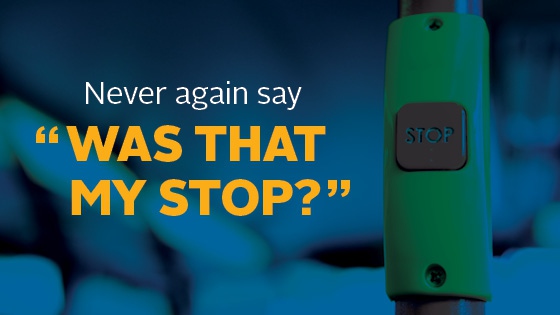 Stop announcements help our hearing and visually impaired transit users through audio and visual cues; users no longer need to rely on the bus operator or other passengers for information during their trip. Tourists and passengers who may be unfamiliar with a route also benefit from advanced notice of upcoming stops. And operators who are new to Halifax Transit or have been introduced to a new route can quickly and easily become familiar with route-specific stops.

What are stop announcements?

Stop announcements are programmed messages that play onboard and outside of the bus. As the bus departs one stop and approaches another, a “next stop” announcement is played over the internal bus speakers and displayed on the digital sign inside the bus. The announcement system uses the GPS location of the bus in relation to the location of the upcoming stop to determine when to play the next announcement.

When the bus pulls up to a stop and opens the front doors, a route announcement plays on the external speaker. For passengers waiting at the bus stop, the route number and destination are announced. This audio announcement is consistent with the text displayed on the bus’ destination sign.

By announcing bus stops, Halifax Transit provides a more user-friendly and accessible transit service to our riders. Through audio and visual cues, hearing or visually impaired riders know exactly where they are in their journey and when they are approaching their desired stop meaning they no longer need to rely on the bus operator or other passengers for information during their trip. Tourists and any passengers not familiar with the order of stops on a specific route also benefit from advanced notice of upcoming stops through automated stop announcements. Currently, even frequent transit users cannot see upcoming stops due to crowds or weather conditions at times. Stop announcements will ensure that riders know when it is time to make their stop request.

What exactly is announced for each bus stop?

The onboard announcements have the following standard format:

This stop announcement plays once over the speakers inside the bus and scrolls once across the display sign (where the “Stop Request” message is displayed).

Can I hear/see a stop announcement when my bus goes on detour or if a stop is temporarily closed or relocated due to construction?

When buses go on detour, the stop announcement system knows the bus is “off-route” and the programmed announcements stop playing. Once the bus returns to its regular route, the system resyncs and the announcements start playing again.

Bus stops that are closed or relocated for a short period of time pose a challenge for our stop announcement system. When Halifax Transit is notified that a stop is being moved for a long period of time (e.g., due to long-term construction), we may be able to change the announcement in our system, however, short-term stop relocations will not be reflected. We apologize for any inconvenience this may cause.

Stop announcements help our hearing and visually impaired transit users through audio and visual cues on a digital screen inside the bus, meaning that riders no longer need to rely on the bus operator or other passengers for information during their trip.

How did Halifax Transit decide what to name each stop?

Onboard announcements say the official name of the next upcoming stop. The Planning & Scheduling division of Halifax Transit is responsible for maintaining a unique name and number for each stop in our network. Our bus stop names generally include the street the stop is on and a reference to the nearest cross street, where possible. If the nearest cross street is greater than 100 metres away, the stop name may refer to the nearest civic number. On rare occasions, permanent landmarks may be included in stop names (e.g., “South St. Opposite I.W.K. Hospital”).