The information on this page is derived from Moving Forward Together Plan, approved by Halifax Regional Council in 2016. Minor adjustments to route numbering and route planning have since been made and approved in Halifax Transit Annual Service Plans.

Transit facilities range from bus stops to terminals and are the interface between public transit and transit users. It is important that they have a strong presence in the urban landscape, offer safe, convenient and visible pedestrian links to nearby jobs, retail and housing, and make a positive impression on both current and potential transit users. To accommodate transfer connections within the new network, high quality facilities that provide weather-protection to waiting passengers, route and schedule information, convenient pedestrian and cycling access, and safe bus operations are required.

In recent years, there has been substantial investment in improving the customer experience at transit facilities, including the Bridge Terminal, Highfield Terminal, Alderney Ferry Terminal, and Lacewood Terminal. This will continue into the future as improvements will be made to make transit more accessible, attractive, comfortable and easy to use. 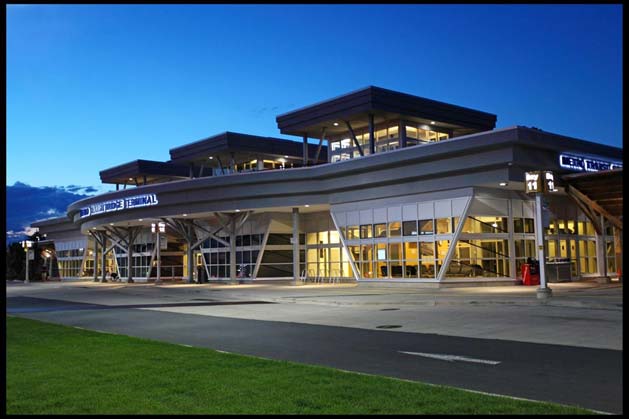 There are over 2500 locations in Halifax where passengers access transit service, some of which average over 2,000 boardings a day, some with fewer than 10. The following guidelines outline the level of passenger amenities which may be provided at these locations based on the number of passengers using the facility, the number of routes servicing the stop, and environmental conditions.

5.1.1    Level 1: Regular Bus Stop
Basic bus stop amenities are found at all locations where passengers can board or exit a transit vehicle. These bus stops can be served by any number of routes, and all bus stops are marked by a bus stop sign with route information and a phone number to access scheduling or real time trip departure information. 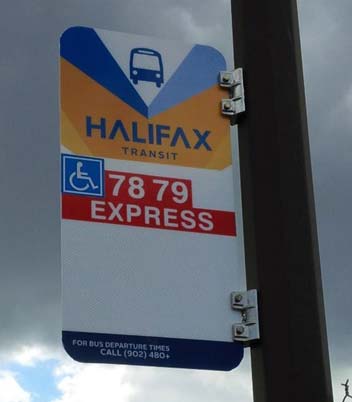 5.1.2    Level 2: Sheltered Stop
In addition to a marked bus stop, these locations include a concrete landing pad to facilitate passenger boarding and alightings, and a shelter. A regular bus stop is a candidate to have a shelter installed if there are more than 100 passenger boardings per day. Shelters may be considered in some circumstances with lower volumes (i.e. stops with 50 – 99 boardings per day), such as when the stop is adjacent to a seniors’ manor or community centre, or if environmental conditions warrant a passenger shelter (i.e. the stop is located in a particularly exposed or windy location). Due to maintenance contracts, resource availability, and space constraints, not all stops which meet these criteria will receive shelters.

5.1.3    Level 3: Enhanced Stop
Enhanced bus stops are typically found at major destinations and/or a transfer location for a large volume of passengers. This classification represents a new level of investment in bus stops for Halifax Transit, meant to facilitate the transfers required to complete a trip in the transit network. A bus stop is a candidate to become an enhanced bus stop if there are more than 250 boardings per day, and the stop is serviced by at least two routes and/or is located at a regional destination or intermodal transportation hub. Bus stops will be upgraded to enhanced bus stops based on resource availability.

The amenities at each enhanced bus stop will vary based on site conditions, but in addition to a shelter, they may be equipped with additional seating, lighting, passenger information (route maps or schedule information), waste receptacles, or additional/larger shelters. An example of a candidate to become an enhanced bus stop is the bus stop on Joseph Howe Drive at Dutch Village Road, which has on average 420 boardings  per day. The photo to the left shows one example of an Enhanced Stop layout, featuring a shelter, route maps and schedule information, seating, and a garbage receptacle.

5.1.4    Level 4: Transit Hub
This level of bus stop amenity is often found at transit terminals that do not have indoor passenger waiting areas, and also in other major transit terminals/transfer locations with more than 500 boardings per day. This level of stop is a transfer node, and may also have a Park & Ride facility. In addition to Level 3 amenities, these locations could be candidates to be fitted with electronic message boards, bike racks, and payphones, where space permits. Halifax Transit will also investigate the potential for heated shelters at these locations. Examples of locations that could be considered for Level 4 amenities include Highfield Terminal, Cobequid Terminal, Penhorn Terminal, Bayers Road Centre, Tacoma Centre, and major stops adjacent to one of the colleges or universities.

The Halifax Transit network has 16 off-street transit facilities. Maintaining terminal and Park & Ride facilities in a state of good repair is essential to providing a comfortable, convenient location for passengers to access transit service, and to encouraging additional ridership.

Halifax Transit does have several older facilities including the Mumford Terminal, Cobequid Terminal, and Penhorn Terminal. The following outlines planned improvements to these facilities:

Mumford Terminal (2019-2022): The existing Mumford Terminal is over capacity, and needs to be replaced before any additional service can be introduced beyond what is described by this plan. This terminal is a key facility in the new network, and existing capacity constraints and minimal passenger amenities reduce the desirability of transferring at this location. The terminal is tentatively scheduled for replacement in 2020/21, with design work starting in 2019/20.

Wrights Cove Terminal (tentatively 2020): Based on the network proposed in this plan, a new terminal is required to facilitate transfers into the Burnside Business Park. This new terminal will be located on Bancroft Lane near the intersection with Windmill Road. This will be a relatively small facility, featuring four to six bus bays, layover space for vehicles, and passenger and bus operator amenities.

This is an operationally important location in order to reduce redundancy in the route network by facilitating transfers for  passengers from routes  coming from Dartmouth or Sackville into Burnside Business Park. It is also sited adjacent to a developing high density residential development, building a community supportive of Transit Oriented Design principles.

This facility is slated to open in Fall 2020 to coincide with implementation of this plan.

West Bedford Park & Ride (tentatively 2020): This terminal will be located on Innovation Drive in West Bedford, in the middle of a rapidly growing community. The site will be within 500 metres of approximately 8,800 people and also adjacent to the new CP Allen High School. This location can sustain a 350-400 car Park & Ride, and a four bay bus platform. It is estimated that ridership could reach approximately 950 daily boardings at this location. Significant ridership origins are expected from west of Highway 102 from the communities of West Bedford and Hammonds Plains. Transit service demand is expected to grow in- step with these expanding communities, supporting demand for those travelling toward the regional centre and also demand for increased transit service to the employment and nearby institutional destinations in West Bedford. This facility is slated to open in Fall 2020, to coincide with the implementation of this plan.

Margeson Drive Park & Ride (tentatively 2020): This facility is slated for construction in the 2019/2020 Fiscal Year, with service beginning in 2020/2021. Located adjacent to Margeson Drive in Middle Sackville, just south of Highway 101, this terminal will include a Park & Ride lot with space for approximately 500 vehicles and a small platform. This facility will be served by the Route 310 Middle Sackville Regional Express.

Park & Ride facilities complement transit by providing an option for those who would like to travel by transit but need a vehicle to complete some portion of their trip. These facilities are also important for those who do not have another option to access transit service, for example those living outside the Halifax Transit service area. As most Park & Ride passengers are travelling to downtown, Park & Rides may help to manage roadway congestion and reduce vehicle emissions. However, the implementation of new Park and Rides require careful consideration, for several reasons:

1.    Reliance on Private Vehicles: The introduction of too much parking can detract from the overarching goal of minimizing private vehicle use, and the introduction of high traffic volumes to a new Park & Ride could have a negative impact on the local community. It could also have the impact of reduced ridership on Local Routes.
2.    Cost: Building and maintaining Park & Ride facilities often requires large capital investments, typically ranging from $3,000-$9,000 per stall. This is costly, considering only about 3% of Halifax Transit users make use of Park & Ride facilities.
3.    Transit Oriented Design: In some cases, Park & Ride facilities are not the highest and best use of land adjacent to transit terminals. Land near transit facilities is ideal for Transit Oriented Design developments which would include a mixture of land uses, designed to support active transportation and transit. This type of development can result in significantly higher transit ridership than would be generated from a Park & Ride facility.
4.    Commuting costs: Regular Park & Ride users are unlikely to reduce the number of cars they own, whereas riders who walk or use bus connections can realize significant savings by foregoing ownership of one or more vehicles. The potential for redirecting personal income from multiple car ownership to other interests can be a further incentive for using public transit.

5.3.1    Introducing a new Park & Ride
Despite these drawbacks, carefully planned Park & Rides can have an important role in encouraging sustainable transportation in key locations. The following outlines the conditions in which the creation of a new Park & Ride facility may be considered:

•    New Regional Express Service: Regional Express services are designed to serve rural, outlying communities in which no local Halifax Transit service exists. These commuter- focused services are dependent on the Park & Rides to allow passengers to access them.
•    Near the Periphery of the Transit Service Area: New Park & Ride facilities may be considered at or near the urban transit service boundary, as identified in the Regional Plan. This will allow potential transit users the option of driving to a Park & Ride and boarding a transit vehicle to complete their trip.
•    Adjacent to Higher Order Transit: New Park & Ride facilities may be considered adjacent to a transit facility served by a higher order transit service such as ferry, rail, or Bus Rapid Transit (BRT).
•    Where a High Level of Transit Service is provided adjacent to the Proposed Location: In addition to the conditions listed above, new Park & Rides will only be considered where a high level of transit service is provided.
•    As an Interim use Pending Transit Oriented Development: In some locations, a temporary Park & Ride lot may help establish ridership on a new service, with a view to developing the lot as a compact, walkable mixed-use neighbourhood in the longer term.