The municipality is in the process of acquiring lands that, together with the lands of the province, is to lead to the establishment of the Blue Mountain-Birch Cove Lakes Regional Wilderness Park.

Further to this, staff have been directed to acquire lands from Armco Development Limited that is comprised of 49 hectares along Nine Mile River in Timberlea, that extends inward to the core wilderness area of the conceptual park boundary. The other acquisition was from Barrett Lumber Company Limited and is a total of 81 hectares, which is in the vicinity of Blue Mountain. 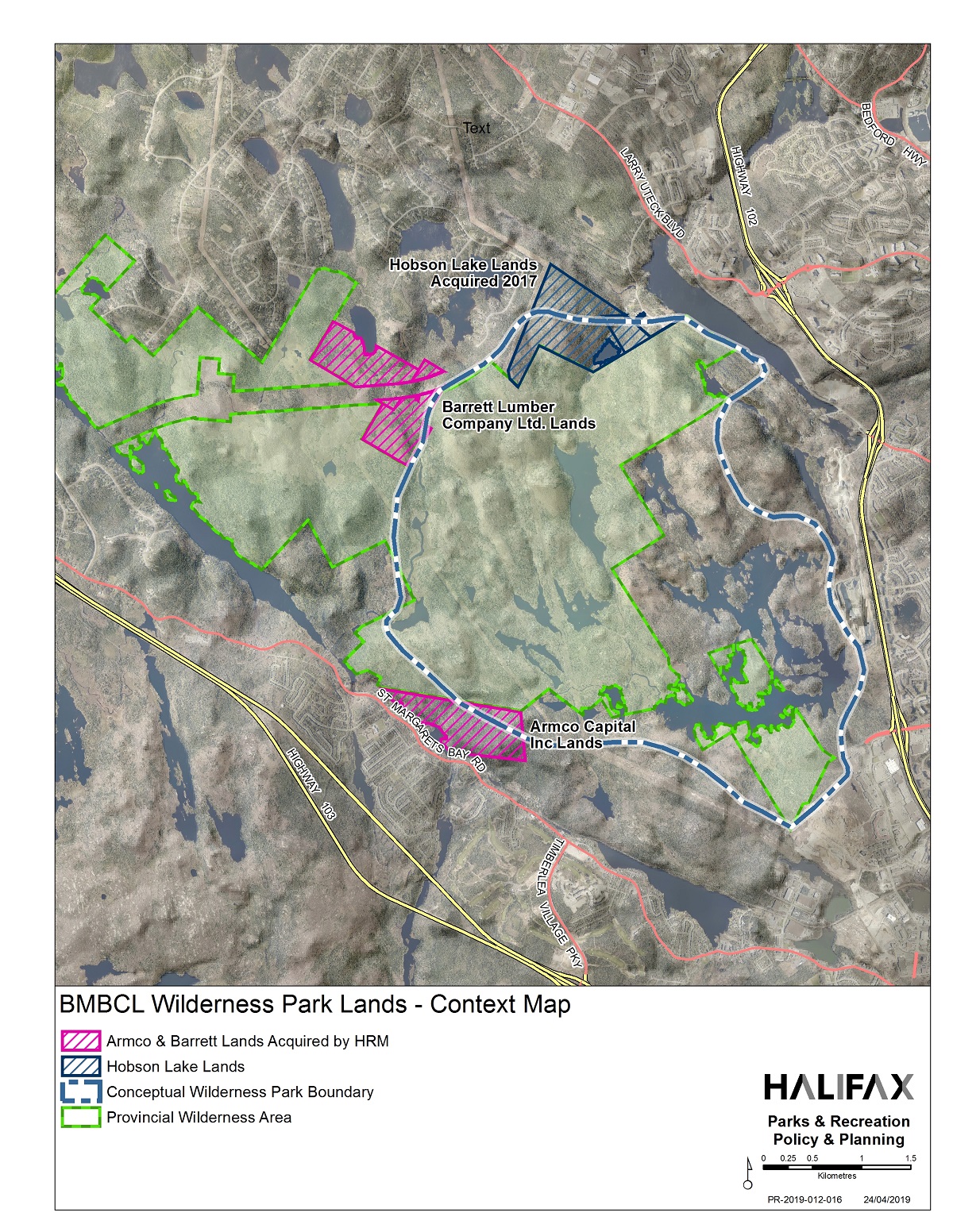 In 2006 the Regional Plan was approved by Council. It outlined the creation of a public wilderness park around Blue Mountain and Birch Cove Lakes. The conceptual park boundary, made up of a unique mix of natural forest stands, lakes, streams, wetlands and breathtaking vistas, is within a stone’s throw of downtown Halifax.

The municipality is in the process of acquiring lands that, together with the lands of the province, is to lead to the establishment of the Blue Mountain-Birch Cove Lakes Regional Wilderness Park.

On November 28, 2017 Regional Council gave direction to staff to:

On January 18, 2018 the Halifax Regional Municipality purchased approximately 197 acres of lands to form part of a Blue Mountain-Birch Cove Lakes Regional Park. This important acquisition marks the first parcel of land to be acquired by the municipality towards the creation of the regional park, which is proposed in the municipality’s Regional Plan.

The Hobson Lake lands are to the rear of properties along Collins Road and beside provincial Crown lands that are already designated as part of the Blue Mountain-Birch Cove Lakes Wilderness Area. The Halifax Regional Municipality has been seeking a formal access to the provincially-designated wilderness area for some time. The municipality continues its efforts to acquire additional lands towards the creation of the park.

The Hobson Lake lands have been acquired from West Bedford Holdings and will both enable public access into the regional park and support the protected wilderness area by acting as a buffer between it and developed lands. The acquisition includes provision for a future regional park trailhead entrance that is anticipated to be developed with parking and services for park users. The entrance will be achieved as part of the parkland dedication process as the company develops the next stages of its Bedford West community, which is anticipated in the next four to six years.

With the acquisition, municipal staff will be consulting with both the province and the public regarding the future planning of the Hobson Lake lands as part of the creation of the overall Blue Mountain-Birch Cove Lakes Regional Park. Public consultation is expected to begin in the spring.

In 2006 the Regional Plan was approved by Council. It outlined the creation of a public wilderness park around Blue Mountain and Birch Cove Lakes. The conceptual park boundary, made up of a unique mix of natural forest stands, lakes, streams, wetlands and breathtaking vistas, is within a stone’s throw of Halifax.

What is a Wilderness Park?

Generally speaking, Wilderness Parks are nature parks which are specially designed to protect an area of land and/or water, support natural processes, species and habitat; and where human activities are primarily passive (e.g. hiking, nature interpretation and appreciation), and do not compromise ecological function.

The Blue Mountain Birch Cove Lakes area has been referred to as “the municipality’s Keji”. The lakes and forests offer you an opportunity to leave urban life behind and be immersed in a unique natural habitat within minutes of the city. Recreation opportunities include short, moderate, and long hiking, cycling, swimming, skating, fishing and canoeing.

The proposed park provides an opportunity to protect headwaters of both the Birch Cove Lakes and Nine Mile River watersheds. This assures better water quality for communities downstream, and the natural environment.

Biodiversity is declining, so the large tract approach preserves a variety of ecosystems native to the area. Significant lands on the interior of the proposed park have already been protected by the Province of Nova Scotia as the Blue Mountain – Birch Cove Lakes (BMBCL) wilderness area.

Studies have shown that disconnected natural areas are not sustainable. Halifax’s geography gives the opportunity to protect wilderness corridors. This ensures plants and animals can be preserved near urban areas while still being connected to the rest of the province. These links to other natural areas also serve to strengthen bio-diversity.

The Blue Mountain Birch Cove Lakes wilderness corridor has the potential to connect to Pockwock, Big Five Bridges and Western Common wilderness areas. A key objective of the Regional Plan.

After the 2006 Regional Plan was approved, staff began taking action to advance the creation of the park. This timeline highlights some of the important milestones that have occurred:

2006: Regional Plan approved, outlining the creation of a public wilderness park around Blue Mountain and Birch Cove Lakes. The conceptual park boundary [PDF] is outlined on Map 11 of the current Regional Plan.

September 2007: Annapolis Group and Susie Lake Developments requested initiation of Secondary Planning Process for their lands along the Highway 102 West Corridor, a portion of which falls within the conceptual park boundary [PDF].

2009: Province of Nova Scotia designated Crown lands that fall within, and just west of, the proposed park boundary as protected wilderness area.

September 17, 2013: Regional Council approved the Terms of Reference [PDF] for an independent facilitator and authorized staff to enter into discussions with private property owner representatives.

November 28, 2017:  Regional Council gave direction to staff to purchase the Hobson Lake lands, undertake consultation with the province and public, and to continue to implement the plan for further land acquisition.

June 28, 2018: A public information meeting was held at the Bedford – Hammonds Plains Community Centre to provide information about the municipality’s acquisition of the lands for wilderness park purposes and to discuss its relationship to adjacent properties, possible future uses, entrances, and trail connections.

March 5, 2019: Regional Council accepted staff’s annual report and gave direction to advance the acquisition of certain lands and enter into an agreement with the federal government for funding.