Less than a year after City Hall was besieged by drunken rioters, unruly mobs again rampaged through the streets of Halifax. On the evenings of February 18 and 19, 1919, just months after the First World War had come to an end, Halifax businesses owned by Chinese immigrants were the target of xenophobic anger as violence erupted in the downtown and North End of Halifax.

Front-page headline in the Halifax Herald from February 19, 1919

On the first night, a returned soldier dining at the Crown Café on Gottingen Street refused to pay his bill “and abused the Chinese proprietor” (The Evening Mail, February 19, 1919). When he was asked to leave, he attempted to steal a package of cigarettes, then turned off the lights, grabbed the cash register, allegedly stealing $75, and threw it through the window, calling for help. The police arrived and asked the soldier and several of his friends to leave the café. Later that night the ousted group returned to the café “and proceeded to clean up the place” (The Daily Echo, February 19, 1919). These men were joined by others and the mob went on an anger-fueled café crawl primarily targeting Chinese restaurants. In addition to the Crown Café, the Busy Bee Café, the Nova Café, the Victory Café, and the Allies Café, all located along Gottingen, Brunswick, and Barrington Streets, were stormed by the men.

According to the Daily Echo, the mob destroyed “everything that could be smashed, throwing chairs, cash registers, and stoves through the windows into the street, pulling curtains down and breaking the counters.” Police eventually quelled the men at Sackville and Grafton Streets, just as they approached the Frisco Café. The mob caused an estimated $10,000 worth of damaged in the span of a few short hours. Austen Beer of Pictou and John Currie (or John Kerrin/Kerwin, according to the Daily Echo and the Evening Mail) were arrested for unlawfully stealing a quantity of laundry and cups and spoons” from the Busy Bee Café. The Daily Echo reported that a total of $375 was stolen from the cafés, including $300 from the Allies Café alone, along with a typewriter, tobacco, cigars, and cigarettes.

Newspapers report that alleged ringleader, Thomas Andrews, a returned soldier from Halifax, was arrested by police, although his name does not appear in the Halifax Police Department Charge Books (sub-series 102-16A-75). One of the few extant police sources for this time period, the Charge Books do show an active night for February 18, 1919. Samuel Lesser was arrested and charged with inflicting grievous bodily harm after assaulting Fang Wong, a Chinese-Canadian laundry owner, on Agricola Street. 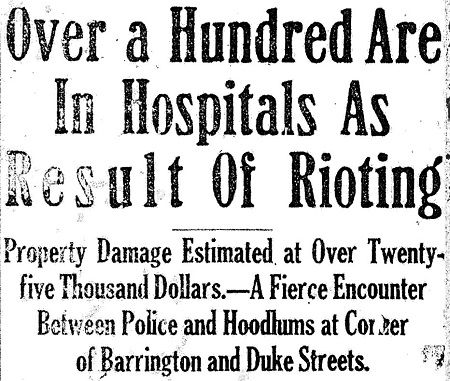 The detainment of Andrews did not stop violence from erupting again the following evening when “several thousand” (The Daily Echo, February 20, 1919) soldiers and civilians destroyed ten shops along Gottingen, Buckingham, and Barrington streets. The riot began at 10 p.m. and lasted several hours. The Crown Café was targeted again and the windows, which had just been repaired, were once again wrecked. The Daily Echo reports that the mob “turned and came southwards along Gottingen, raiding businesses whose proprietors were believed to be aliens.”

The rioters clashed with police at Buckingham and Barrington Streets (where Scotia Square currently stands). The police, wielding clubs, stormed toward the men, showering them with beatings. The crowd dispersed and police followed and “many a club and skull met” again (The Daily Echo, February20, 1919) which resulted in many dozens of men being sent to various hospitals around the City. The mob had broadened their scope, moving from Chinese restaurants to other businesses. By the end of the night, stores along Brunswick, Grafton, Jacob, Buckingham, and Argyle streets were damaged. 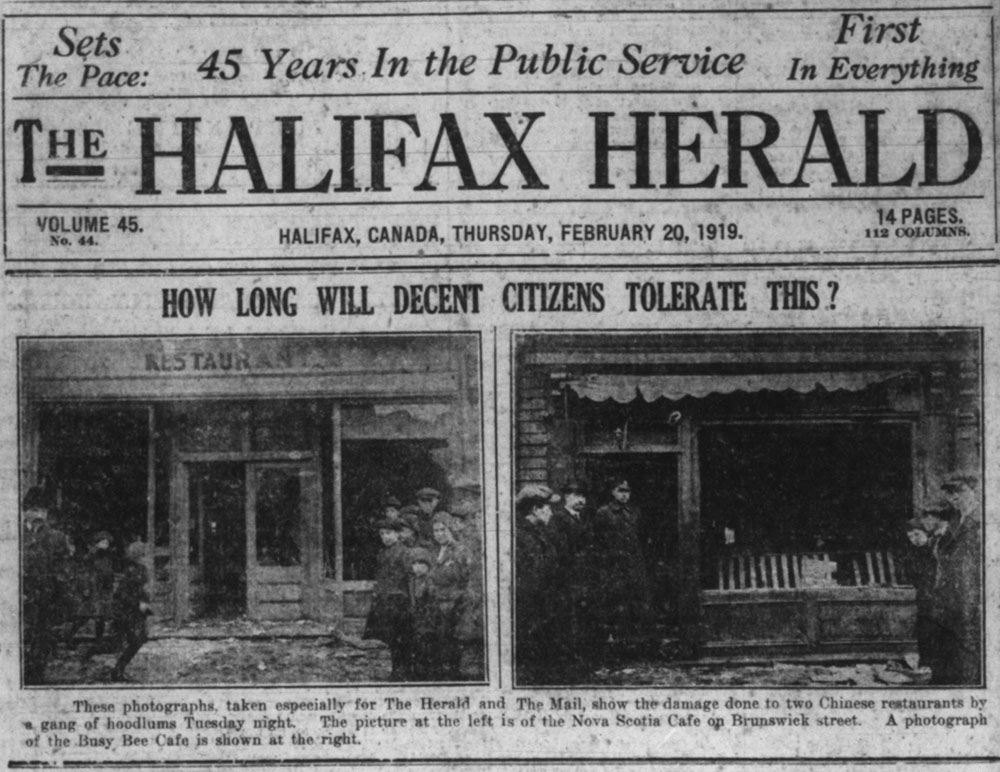 Front-page coverage in The Daily Echo, the Halifax Herald, and The Evening Mail indicates that the riots were racially motivated and specifically targeted businesses owned by Chinese proprietors. Reaction to the news showed that "every decent citizen is indignant over the disgraceful riots" (The Evening Mail, February 20, 1919, p.1). Citizens called on City officials to act following the riots. Newspaper headlines included “Prompt and Fearless Action Must Be Taken Today – it’s up to the Civic Officials” (The Evening Mail) and “Well, Gentlemen, What Are You Going to Do?” (The Halifax Herald). Haligonians wanted to ensure that more rioting did not occur, calling for action from the military, the police, and council members.

The City received letters from many business owners seeking reimbursement for losses associated with the riots. By April 10, 1919, the total damage claims amounted to $12,012.78, with over $8,500 from the Chinese restaurants. The Halifax Board of Control** discussed the riots at meetings and struggled to react. 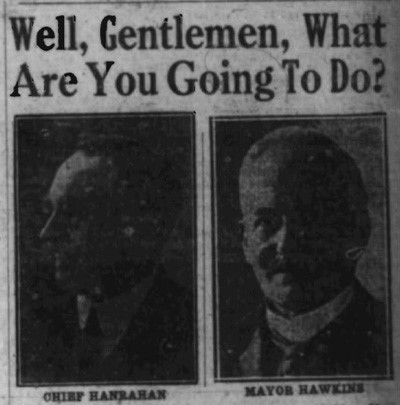 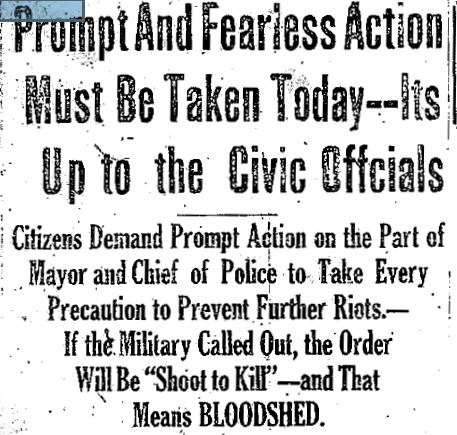 On March 13, City Solicitor, F.W. Bell, advised the Board of Control that the City was not liable for any of the damage sustained during the two riots. On April 10, J.W. Regan, owner of a store on Buckingham and Argyle, attended the Board meeting to ask when then claimants could expect a settlement. Despite multiple objections from Controller John Murphy, Mayor A.C. Hawkins and all the other controllers refused to approve payment of the claims. More claims for damages were received by the Board through to the end of April. On April 15, a petition from affected citizens was submitted, requesting the Board form a committee to look into legislation which would allow the City to pay the claims. No further action seems to have been taken and all claims for reimbursement were responded to by letters from the Solicitor declining liability.

Board of Control excerpts 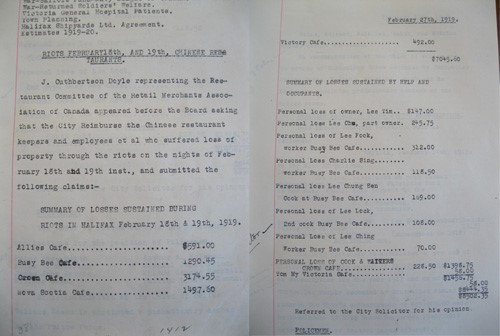 Review digital copies of the relevant excerpts from Board of Control Minutes from February 25 to April 29, 1919 to track the official reaction. Unfortunately the submissions to the Board of Control (series 102-2B) for this time period, such as the petitions mentioned, are not known to have been preserved.

Historical context of the Halifax Board of Control

The reaction of City officials may have been tempered by the fact that the riots occurred in the midst of rife turmoil in civic governance. The business-like, centralized Board of Control system of government that had been brought into Halifax in 1913 had fallen out of public favour. Power struggles and animosity between the mayor, controllers, and aldermen resulted in 10 of 12 aldermen resigning in the Fall of 1918, leaving the City without quorum for Council. Mayor A.C. Hawkins and four controllers operated the government until the province enacted a plebiscite in the spring of 1919 that ended the Board of Control, and returned Halifax to a system of aldermen elected in each ward.
Read the administrative history of the Board of Control.

This exhibit was inspired by a reference request from Dr. Zhongping Chen, Professor in the Department of History at the University of Victoria, who is researching the history of the local Chinese community. Halifax Municipal Archives appreciates the professor’s willingness to share his preliminary research and look forward to its publication. The Halifax Public Libraries and the Chronicle Herald Library also assisted with gaining access and permission to use the copies of the newspapers cited.

Halifax Municipal Archives gratefully acknowledges the financial assistance of the Department of Canadian Heritage and the Canadian Council of Archives in supporting the Young Canada Works summer student program which funded the work of Elizabeth O’Brien, a MLIS candidate at Dalhousie University to prepare this exhibit.