The Halifax Municipal Archives has thousands of maps and plans in its holdings.  Only a small fraction are in the Archives Database, but many others are searchable in a drawings database that can be searched on-site at the Archives.

Here is a small sample of our collection. For higher resolution copies of these maps and plans, please contact the Municipal Archives. 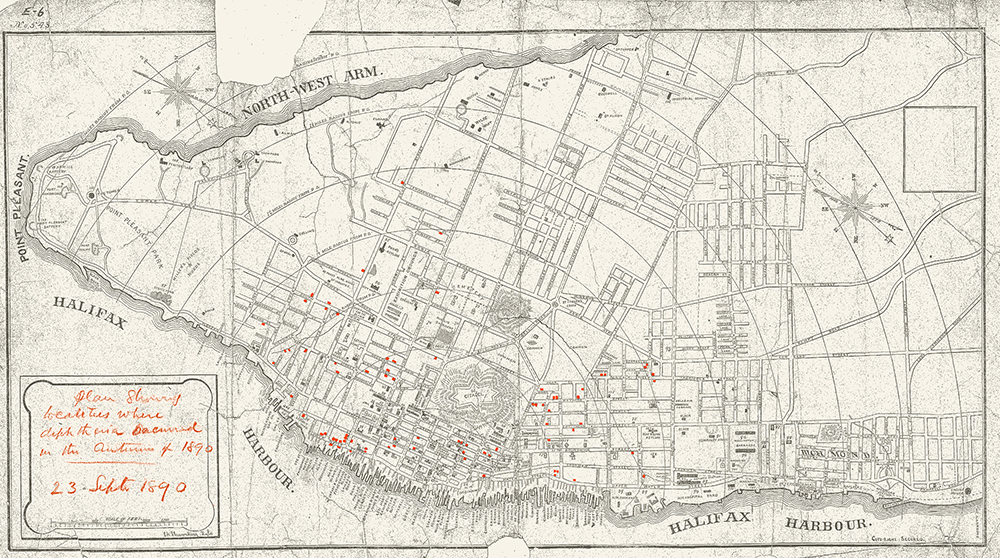 In 1890, City of Halifax staff, probably from the Board of Health, marked the location of cases of diphtheria in colour on this plan. The 1891 Report of the City Medical Officer, Dr. Thomas Trenaman, indicated that there were 192 deaths from diphtheria in 1890—the leading cause of death that year. Infectious diseases have always been a serious public health issue; the City of Halifax operated an Infectious Diseases Hospital in the North End, beside Rockhead, the City Prison.

The City of Halifax created similar maps locating typhoid cases during the outbreak of 1913–1914.

The base map on which staff marked the locations of diphtheria, is a print from a wood-cut done by xylographer C.H. Flowerelling. Before establishing its own mapping service (now HRM’s Geographic Information Systems and Services) the city government used published maps for its mapping needs. Note that the lines of radius indicate distance from the Post Office (P.O.).

This map is one of over 12,000 plans filed with the City Engineer's Office. The Municipal Archives is refining a database of these plans so that it will eventually be searchable by the public. Even now the public can search and view these plans at the Archives. 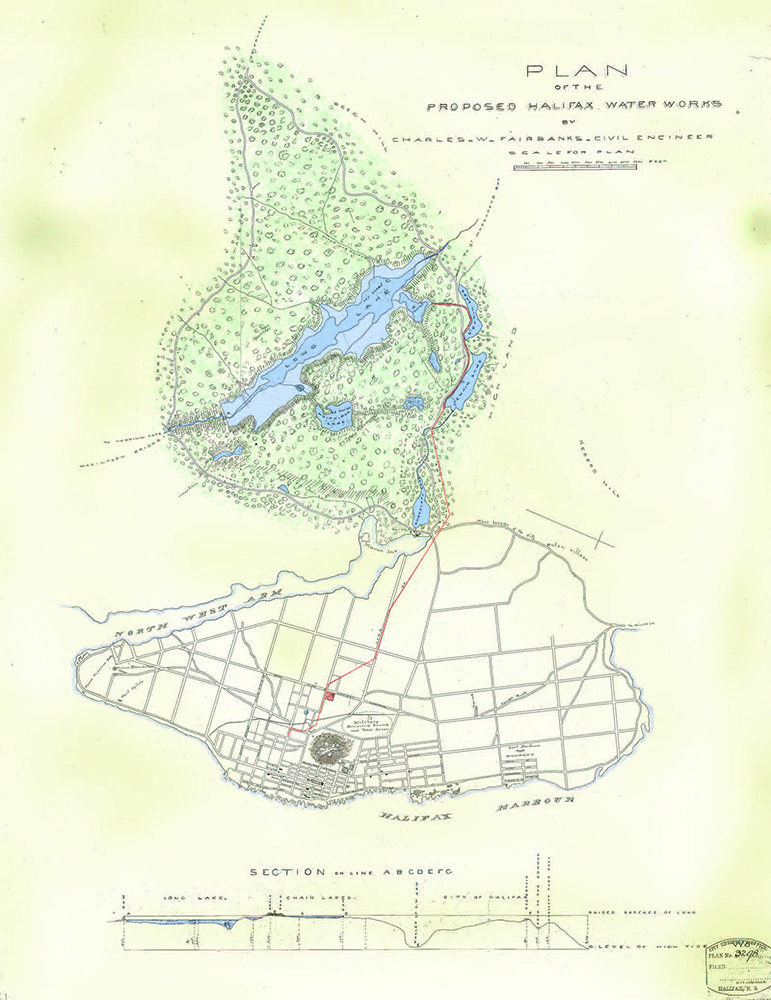 The need for a safe, reliable water supply was crucial after many infectious epidemics in Halifax. In 1844, civic-minded businessmen formed the Halifax Water Company. Civil Engineer Charles Fairbanks was hired to survey the lakes around the town and his plans were used by New York engineer John Jarvis to propose the Long Lake–Chain Lakes water supply.

This undated plan was probably finished by Fairbanks in 1845 to accompany the Jarvis report recommending an open canal connecting a dammed Long Lake to Chain Lakes then through pipes to a reservoir on Wind Mill Hill (now Camp Hill) then through a gravity-fed distribution system to fountains and hydrants (all shown in red on the plan). The board of the Water Company later determined the Camp Hill reservoir as shown on the plan was not necessary, but this plan shows the beginnings of Halifax's water supply system.

Beyond documenting the proposed water supply system, this plan shows the location of features from 160 years ago that you can no longer see: 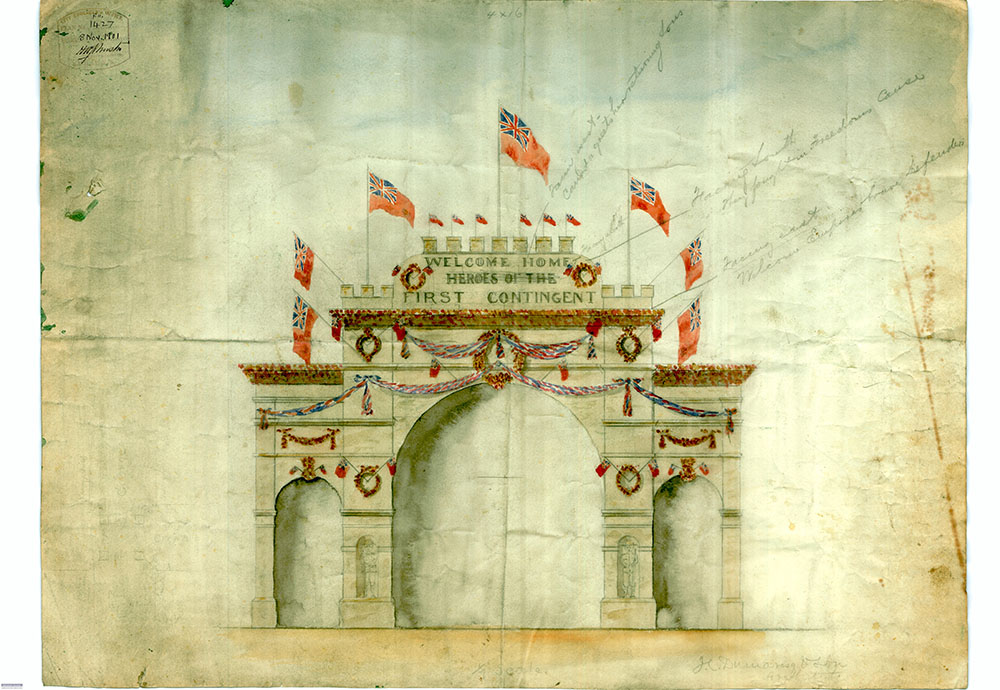 In the summer of 1902, Canadian Boer War volunteers returned to Canada through the port of Halifax after successfully aiding the British in the Boer defeat. The crowds that cheered on the volunteers' departure in 1899 celebrated the return of the first Canadian Contingent in 1901 with parades and concerts. The return of the remaining regiments at the war’s end was equally impressive: Halifax organized street celebrations, a parade, and a triumphal arch in honour of the volunteer’s military successes, such as the battle of Paardeberg in 1900.

The displayed image is likely from an unsuccessful bid for the triumphal arch design, either for celebrations in 1901 or in 1902. The plan is from prolific Halifax architectural firm, J.C. Dumaresq & Son. Received by the City Engineer’s Office on November 8th, 1901, this plan was one of several submitted by local architects, including Hebert E. Gates.

The Dumaresq plan was completed on linen and was coloured to enhance the drawing’s effect. It is one of more than 30,000 plans from the City of Halifax Engineer's Office held at the Municipal Archives.

See also the book Fortress Halifax: Portrait of a Garrison Town (2004) by Mike Parker. Nova Scotia Archives displays an image of the victory parade in their exhibit from the Notman Studio. 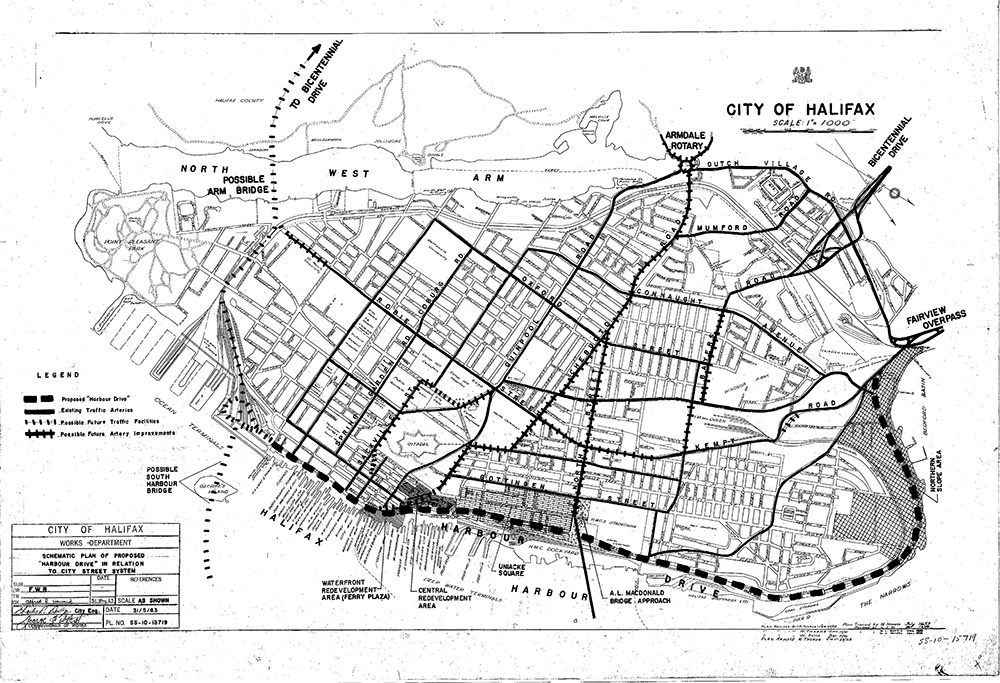 The Halifax Peninsula has inspired generations of urban planners. This 1963 plan shows how the proposed Harbour Drive would integrate with the existing street system as well as with possible "future artery improvements" such as a third Harbour bridge, and a bridge across the North West Arm to Bicentennial Drive.

The Harbour Drive proposal was halted by public opposition in the late 1960s after the Cogswell Street Interchange paved the way for the freeway to replace the waterfront area that became known as Historic Properties.

The Municipal Archives holds the minutes, reports, plans, public hearing files, etc. that document the Harbour Drive proposal development and demise. This map is one of over 20,000 plans filed with City of Halifax Engineering and Works Department. 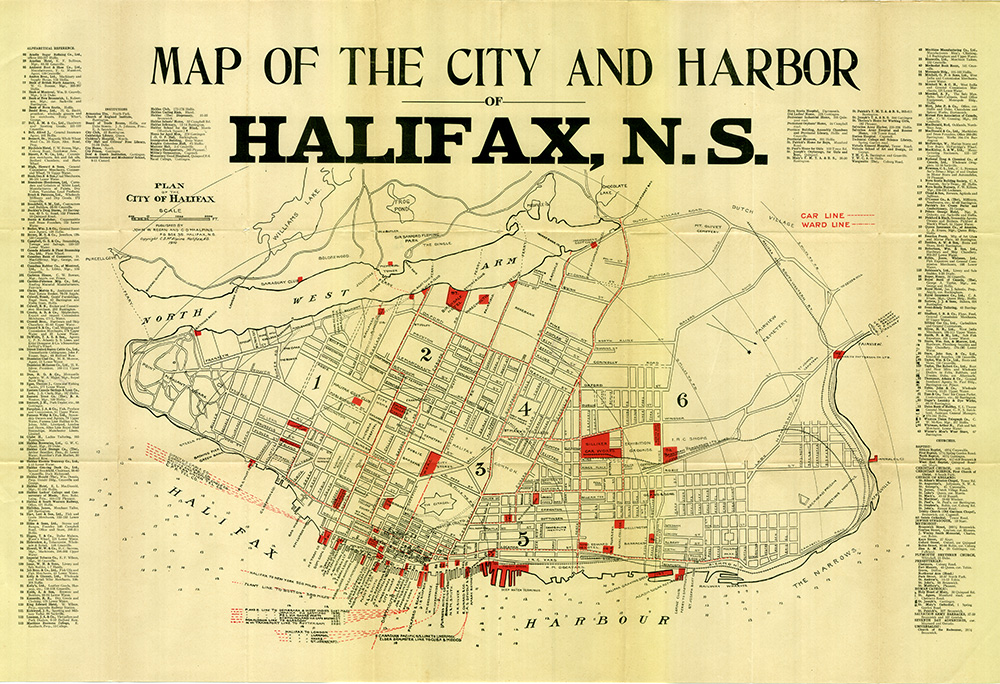 This map of Halifax, published by John W. Regan and C.D. McAlpine in 1910, is one of the many excellent map resources at the Municipal Archives. It shows streets, name and location of businesses and public buildings, the depths in the harbour, tram car lines, ward divisions, steamship lines and underwater cable lines. A directory of local businesses is along the edges of the map.