In 1947, the City of Halifax was preparing to celebrate the bicentenary of the founding of Halifax in 1749. As a symbolic gift to the city, the Canadian Pacific Railway (CPR) arranged to have a huge Douglas Fir tree cut from the forests of British Columbia and delivered across Canada to its eastern seaport for the city's official flag pole outside of City Hall.

The 128-foot log was transported on three railway flat-cars to Saint John, New Brunswick, then by barge across the Bay of Fundy to Digby, Nova Scotia. It took 30 men, on July 2, 1947, to load it back on flat-cars for the final leg of the rail journey to Halifax. 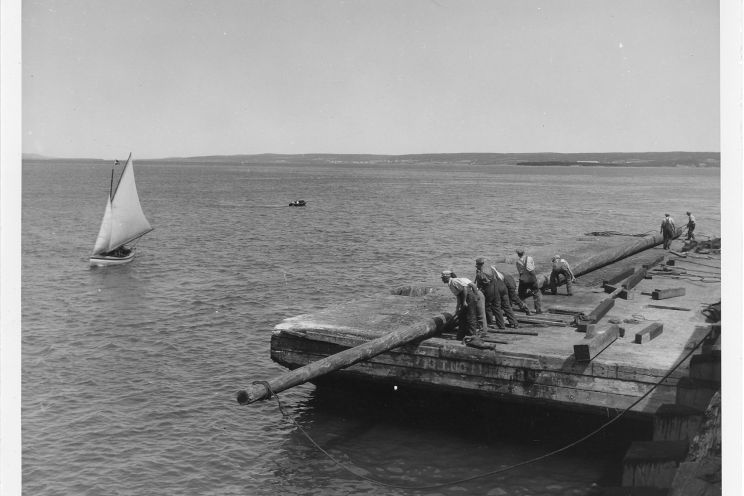 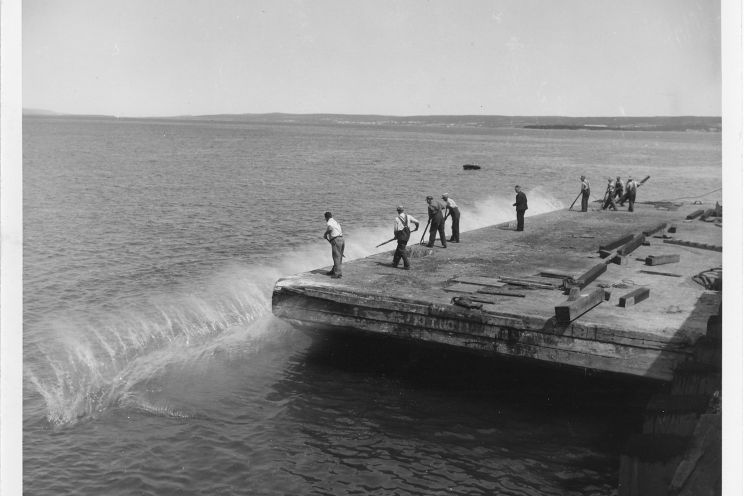 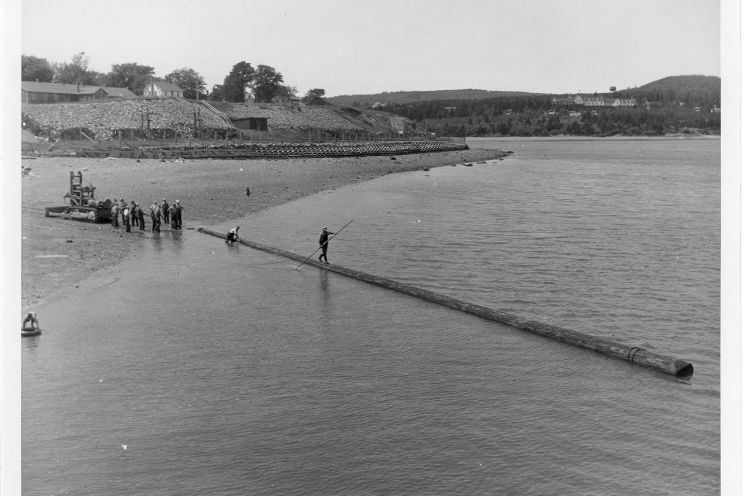 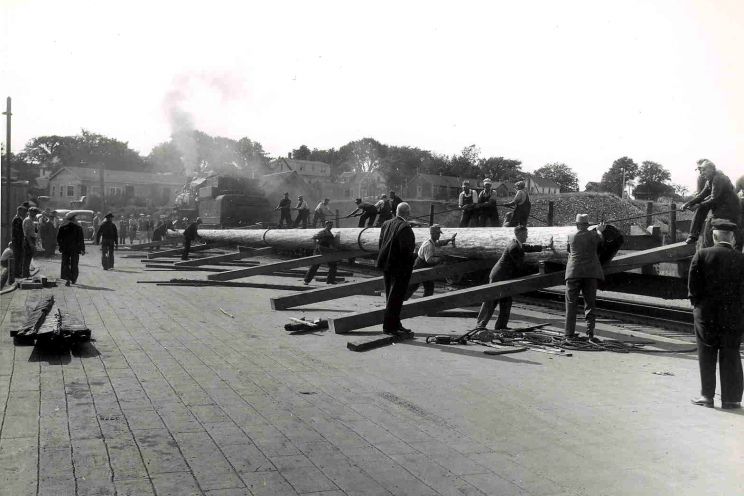 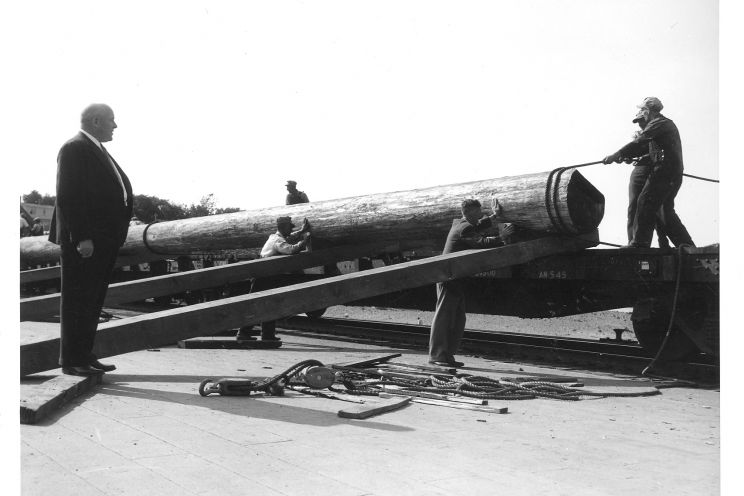 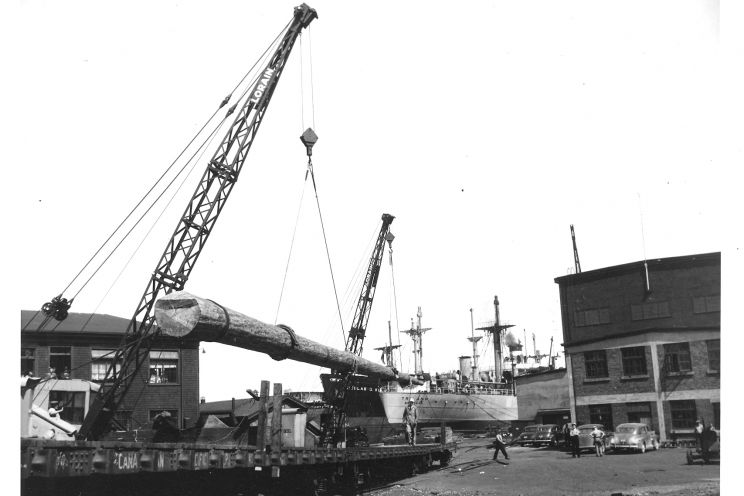 The log was rigged as a flagpole, then transported up Barrington Street to be hoisted into position in the Grand Parade in September. Hundreds of people gathered to watch the early-morning operation. For 38 tense minutes the pole "wavers like a drunken sailor" before Halifax Shipyards' crew fix it to its base. Read newspaper coverage of the erection of the flagpole.

J.A.D. McCurdy was one of the many photographers who documented the ceremony when the CPR officially presented the flagpole to Mayor J.E. Ahern. His photographs are available at Nova Scotia Archives (ask to see 2007-058, vol. 3 #205-219).

Halifax's flagpole was purported to be the tallest in the Commonwealth, until Kew, England claimed that title; however, it was the tallest in Canada, at least until it was next brought to the ground...

By 1975, City staff had noted rot in the flagpole, and Council debated replacing it with an aluminum pole. History and aesthetics prevailed over economics, and Council opted to repair the CPR gift. Repair costs escalated, however, when the pole broke in three as it was being lowered to the ground. As far as is known, no photographs were taken of that dramatic event. For more information, see City Clerk's Office Flagpole repairs file, HMA 102-5-1.33. 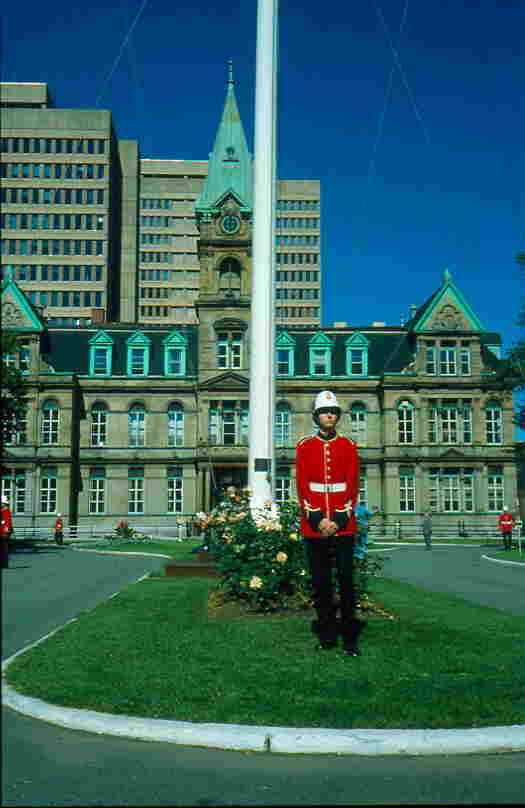 In 2016 engineers determined the rot in the Douglas Fir was extensive and beyond salvage. The flagpole was removed and replaced by a much shorter metal pole in the northeast corner of Grand Parade.

Workers discovered a 1940 Canada 50 cent coin at the base of the flagpole. A 1975 Joseph Howe Festival Commemorative Dollar, and a 1975 City Hall brochure were also discovered. Mayor Edmund Morris placed these items in May 1976 when the flagpole was being re-furbished.

Do you remember the raising of the CPR’s gift flagpole in 1947? Were you there when it split in 3 in 1975? Share your memories of the flagpole .

Halifax Municipal Archives would like to thank our colleagues at Nova Scotia Archives, Halifax Public Libraries, and the Vancouver Public Library for assistance with the research for this exhibit. And a special thank-you to Graham McBride, who donated the CPR photographs.