The Halifax Municipal Archives is located in Mi'kma'ki, the ancestral and unceded territory of the Mi'kmaq People.

As a government archives, our records pertaining to the Mi’kmaq people reflect a history of colonialism. We do not yet have any records from the Mi’kmaq community; the government records are indicative of engagement between the Mi’kmaq and the former municipalities of Bedford, Dartmouth, Halifax County, and the City of Halifax, and only from post-1841, the earliest date these places were formally incorporated. Even these records are fairly limited, as the primary government bodies responsible for Indigenous relations within Nova Scotia are at the provincial and federal levels. This guide offers a summary of those municipal records alongside digital copies of them.

This inventory is not exhaustive and, in many ways, the records highlighted here may act as helpful signposts towards more complete records at the provincial and federal levels. 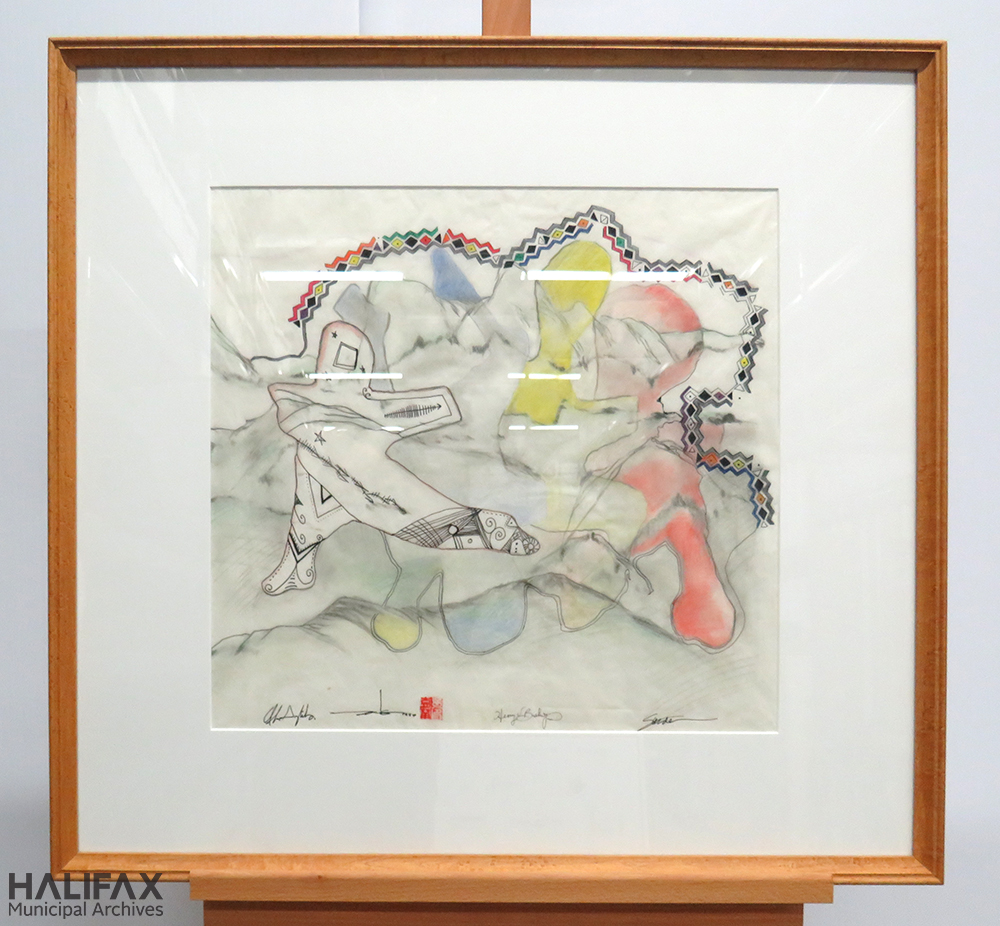 A note on language:

Archival records use the language of their time, which can be incorrect, inaccurate, or offensive to current sensibilities. To represent these records impartially and without interpretation, archivists transcribe records as they were originally written. The language used to describe or refer to Indigenous people is part of the colonial history of the Halifax area, and part of the Archives’ function is to represent the reality of this history as accurately as possible. As a result, no language has been changed in the description or presentation of original records in the database or in this source guide.

Much of what the Halifax Municipal Archives has for family history research comes in the form of billing records, lists, or registers. These records can be valuable if you are looking for a particular person, but they are not specifically focused on the Indigenous population of Halifax. Please see the Municipal Archives’ guide to genealogical sources for more information.

Records from the Halifax County Home, Halifax City Home, and Halifax City Prison do contain information that explicitly pertains to the Indigenous people of the area.

Halifax County operated the Poor Farm from 1887, which later became the County Home. The County Home kept billing records for the individuals, municipalities, and government departments who were responsible for paying the boarding rates of County Home residents. Discussion over this rate, and the billing of the Department of Indian Affairs, can be seen in this County Council minutes from 1968. Minute from Council 1968-07-16

Similar discussions of billing the Department of Indian Affairs can also be seen in Council minutes from the following year. Minute from Council 1969-04-15

There is no particular column in the registers to list ethnicity, and so their inclusion appears to have been at the registrar’s discretion. There is at least one instance of “Mic Mac” being used, in 1908:

Originally called the Poor Asylum, the City Home was a workhouse to care for the city’s unemployed, elderly, orphaned children, mental patients, and medical patients. These registers vary in the detail given from year to year, but often included name, age, date admitted and discharged, reason for admittance, by whom admitted, where discharged to, religious affiliation, and observations that can give interesting details about the individual. 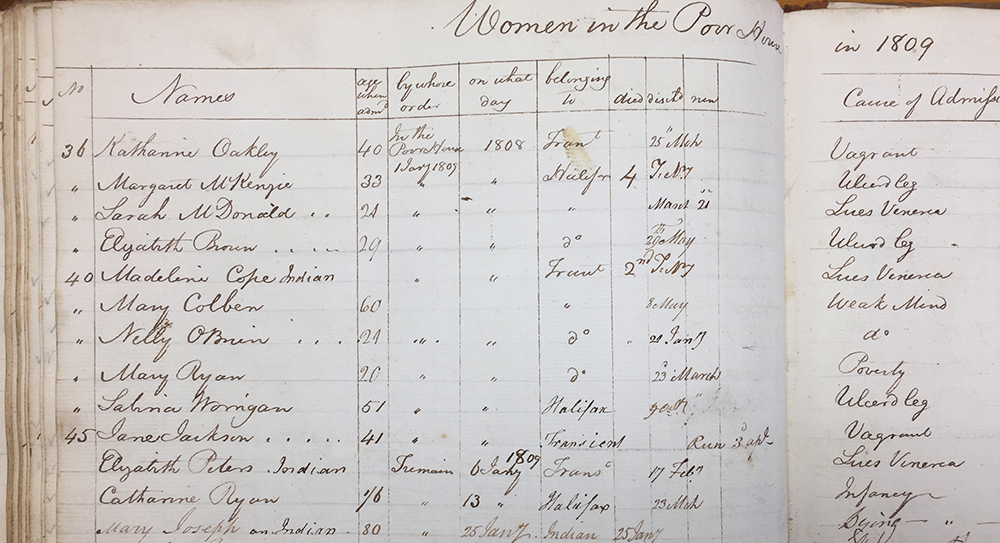 Other genealogical information for Mi'kmaq families is available at Library and Archives Canada as well as the Nova Scotia Archives.

The Bedford Petroglyph Advisory Committee was established in 1991 to determine the use of the land known as The Barrens, with particular focus on the protection and preservation of the ancient Mi'kmaq petroglyphs.

This collection of records primarily from Halifax County shows the Millbrook First Nation’s engagement with the municipality in discussions of water and sewer system improvements on Cole Harbour Reserve lands near Caldwell Road between 1975-1996.

Halifax County Clerk’s correspondence with the Department of Indian and Northern Affairs, regarding the drainage system on Caldwell Road, 1992: 312-61-9-40

Halifax County Clerk’s tax certificates records, including a letter about the Millbrook First Nation Caldwell Road sewer connection, 1996 (Parts of these records have been redacted due to solicitor-client privilege): 312-61-9-49

A presentation regarding the same potential project was given to Dartmouth City Council: 1995-02-28

Shubenacadie Canal Commission minutes show only brief instances of engagement with the area’s Mi’kmaq history while discussing heritage designations and the development of the interpretative centre: 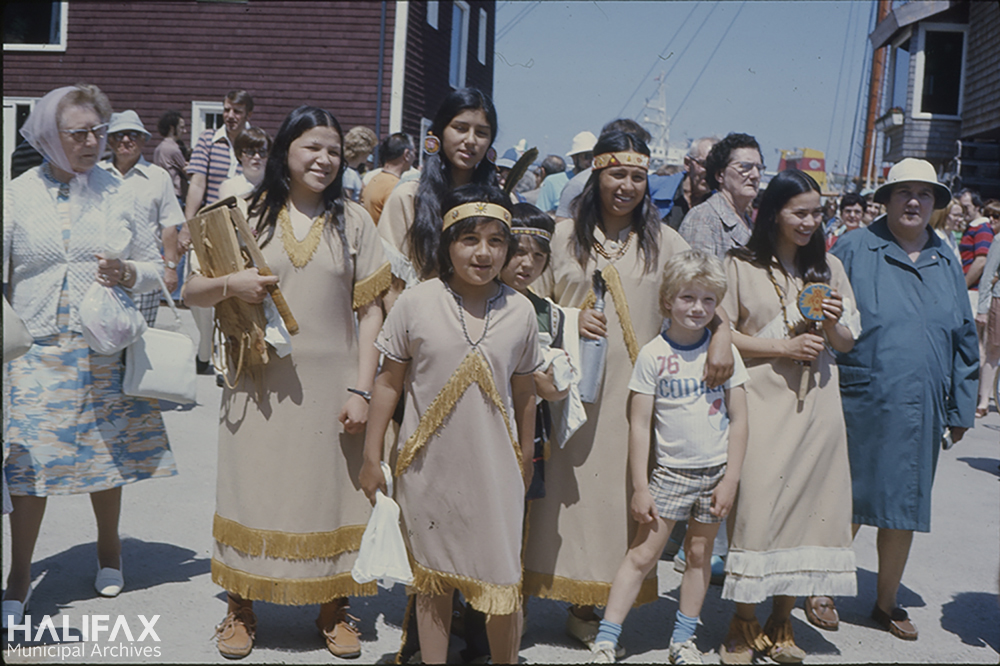 The Board of Police Commissioners (102-94) was established in 1977 to provide civilian governance on behalf of Council on all matters related to the operation of the Police Department. The only instance in the Board's minutes of Indigenous issues being raised directly is this minute from 1992 is regarding an “Aboriginal incident”: 102-94C-1992-09-13. Issues of marginalized communities and of racism are discussed by the Board in broad terms.

Records from the Halifax Mayor’s office on the Tripartite Forum Sub-committee on [aboriginal] policing (102-3-5-023) include minutes, correspondence and reports of a federal/provincial/M'iqmaq committee of the Tripartite Forum that was formed to "examine and formulate recommendations for resolution of policing issues of mutual concern to the federal and provincial governments and the Micmac.”

Records from the County Mayor’s office (312-92) consisting of correspondence with the federal government include discussion of reserve status for Wallace Hill, 1977-1985: 312-92-040

The Halifax County School Board (312-74) was established in 1942, after discussions in each of the previously separate school sections. In that year there is mention of Indigenous students in the minutes, but only twice, and briefly, in regards to provincial funding. 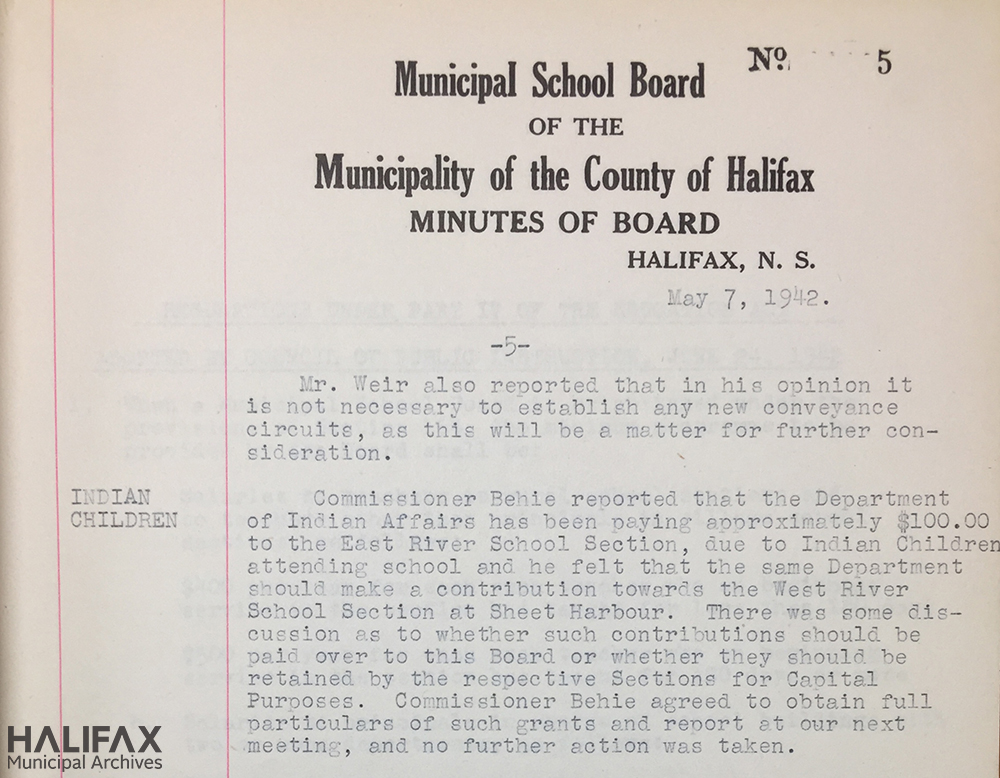 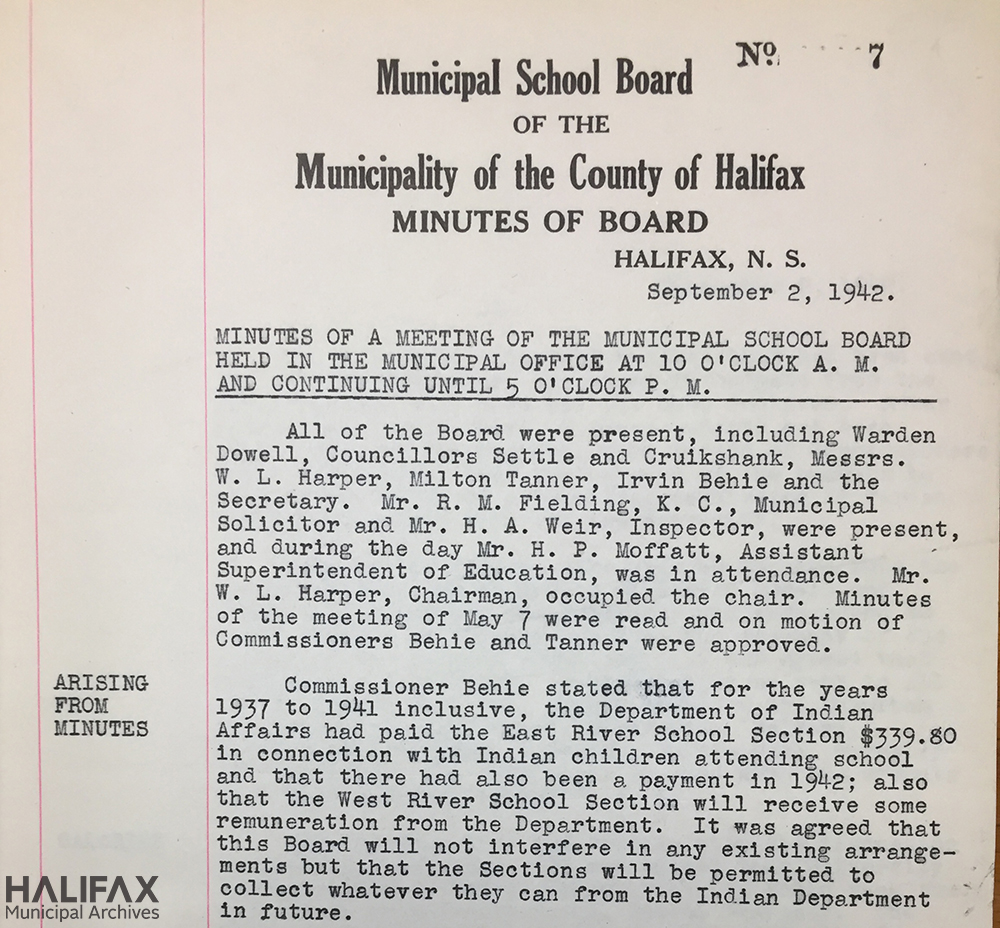 Council minutes provide valuable insight into a variety of Municipal issues and decisions, and can point you in the direction of other potentially relevant records. The Council minutes listed below are representative of those instances in which the municipalities of Bedford, Dartmouth, Halifax County, and the City of Halifax mentioned or directly addressed the Indigenous community.

County of Halifax Council Minutes (312-1A)

Town/City of Dartmouth Council Minutes (101-1A)

City of Halifax Council Minutes (102-1A) 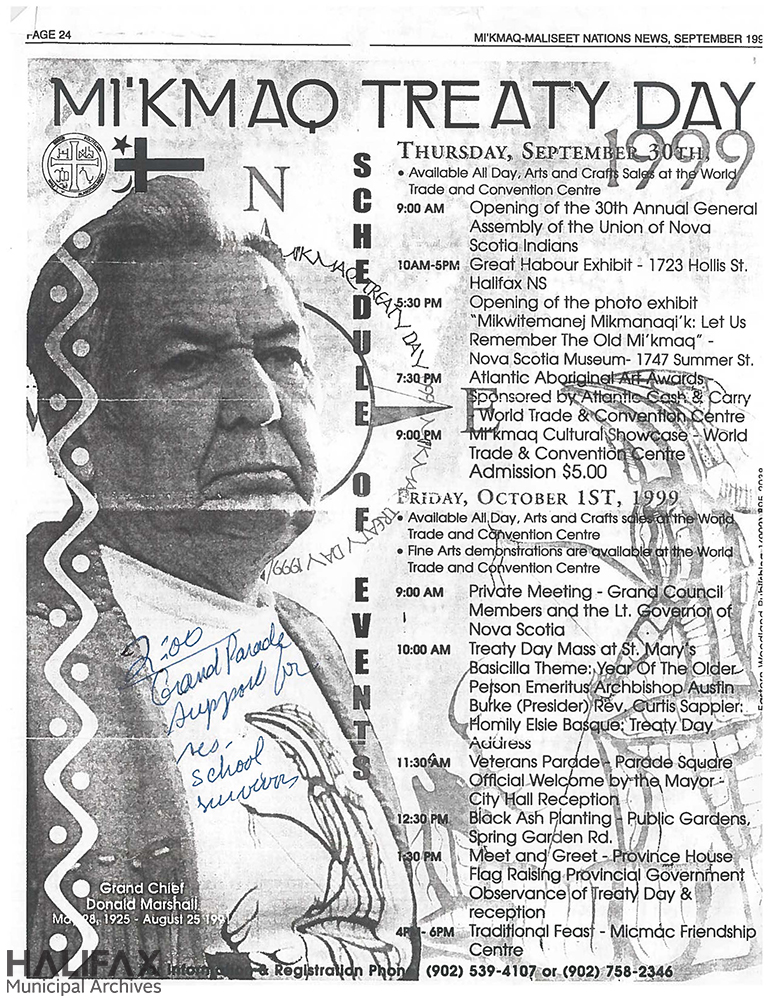 There are several folders of records related to race relations more broadly, such as:

Each of these predominantly deals with the issues related to Black communities within Dartmouth, Halifax County, and the City of Halifax. Though they do occasionally mention Indigenous issues, as well as other marginalized communities within Halifax, many of the more detailed records are primarily focused on anti-Black racism.

The Mi'kmaw Native Friendship Centre is a non-profit, board governed organization that opened in 1973.

Library and Archives Canada has an extensive guide to their Indigenous holdings from across Canada, including genealogical information, residential school records, and photographic collections.

Halifax Public Libraries have a Mi’kmaq History and Culture page which includes guides to library holdings as well as information about events, programming, and local history.

The Halifax Municipal Archives invites donations of records that should be preserved and made accessible to the public, including documents, photographs, maps, plans, books, sound recordings, and film created by individuals, families, businesses or community organizations active within the municipality. See the donation process here.

The Municipal Archives values the inclusion of community records as an important complement to our government records, particularly as we endeavour to better represent Halifax’s diverse community and our histories. However, the Archives is also aware that different practices, such as traditional oral histories, as well as Halifax’s colonial history, may mean that donating to the Municipal Archives is not possible or preferred. The Municipality encourages organizations, businesses and families to care for their own historical records. Advice is available through our Guide to Archiving for Community Organizations, as well as through the Council of Nova Scotia Archives.