The records of the Halifax Women’s Voluntary Services (WVS) are a testament to  the incredible organizing power displayed by the women of Halifax during the Second World War. Donated by Ms. Leslie Pezzack, these records (CR 43) document WVS operations, its relationship with other social agencies in Halifax, Ottawa, and England, and the services provided by its volunteers.

Created in 1943 under the leadership of Mrs. Edith B. Girouard, the WVS recruited women to volunteer in the many war-time service agencies. Modelled after the British Women’s Voluntary Services, with local chapters across the United Kingdom and Canada, the Halifax WVS was run entirely by volunteers and depended on monetary donations from the local community and the British War Relief Society.

The Centre responded to urgent requests from any war-time effort. One notable project involved assisting the Department of National War Services with the distribution of Family Allowance funds to the families of Halifax servicemen. 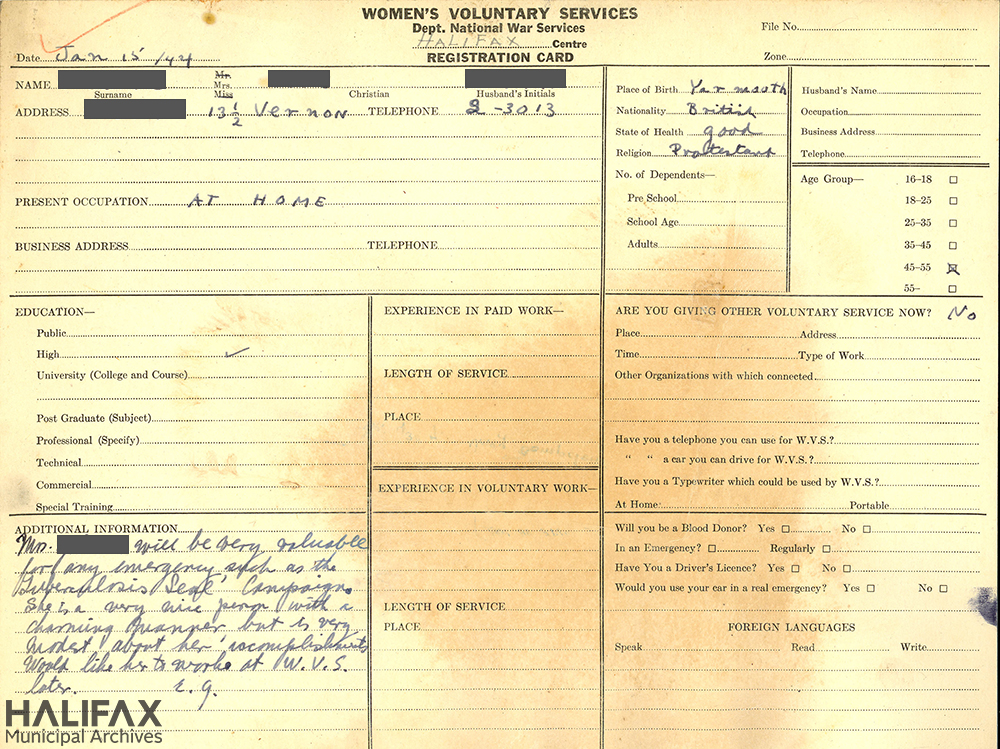 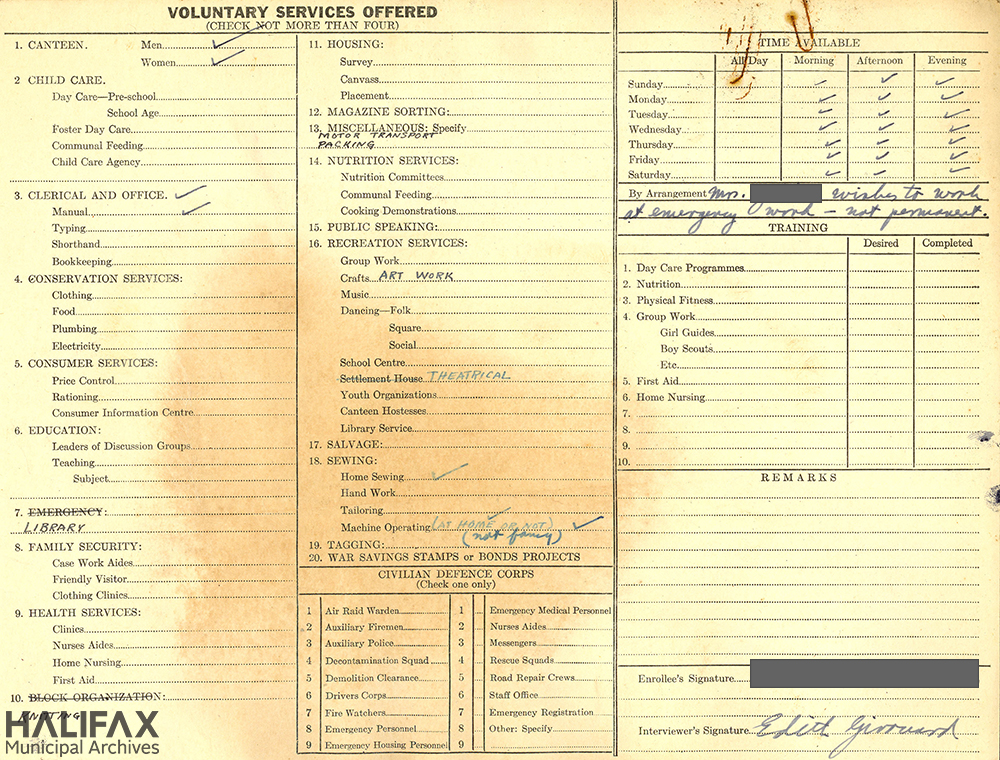 Each volunteer was interviewed by a WVS board member to assess their aptitude. Registration cards were created for each interviewee listing details of her education, skills, and abilities, availability and services they would like to offer.

Volunteers worked in a number of service areas depending on their abilities. Women with nursing skills worked with the Red Cross, other volunteers knit socks for the Navy, and some taught dancing classes for servicemen. At the North End Services Canteen, volunteers worked in the kitchen providing meals, and also held dancing classes where they had to contend with “men who really can dance, but who pretend they cannot” (Halifax Women’s Voluntary Services records,  January 12, 1945 - CR 43-11).

View a larger version of the anonymized sample Registration Card. 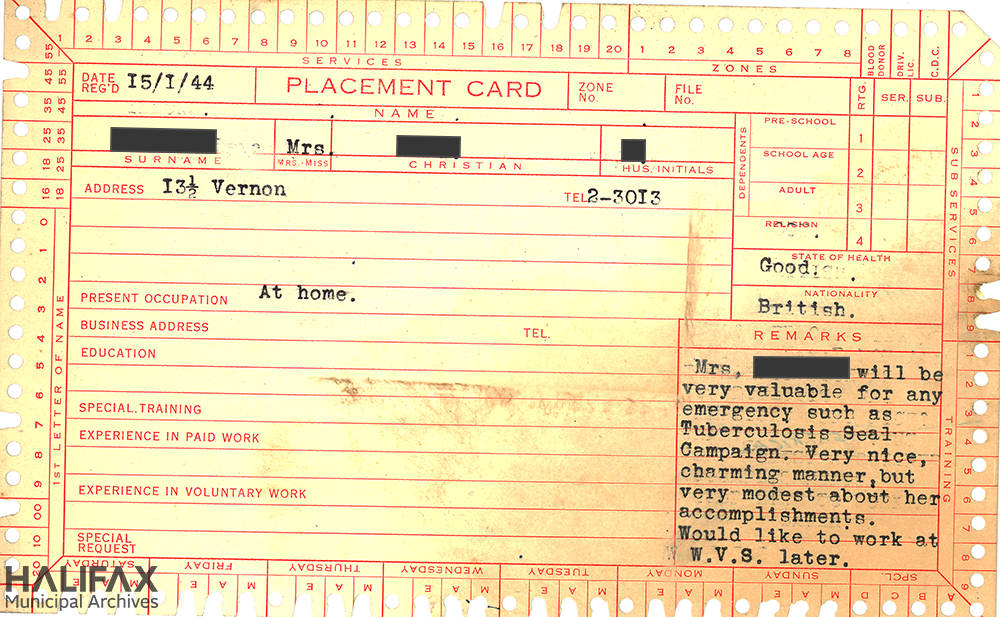 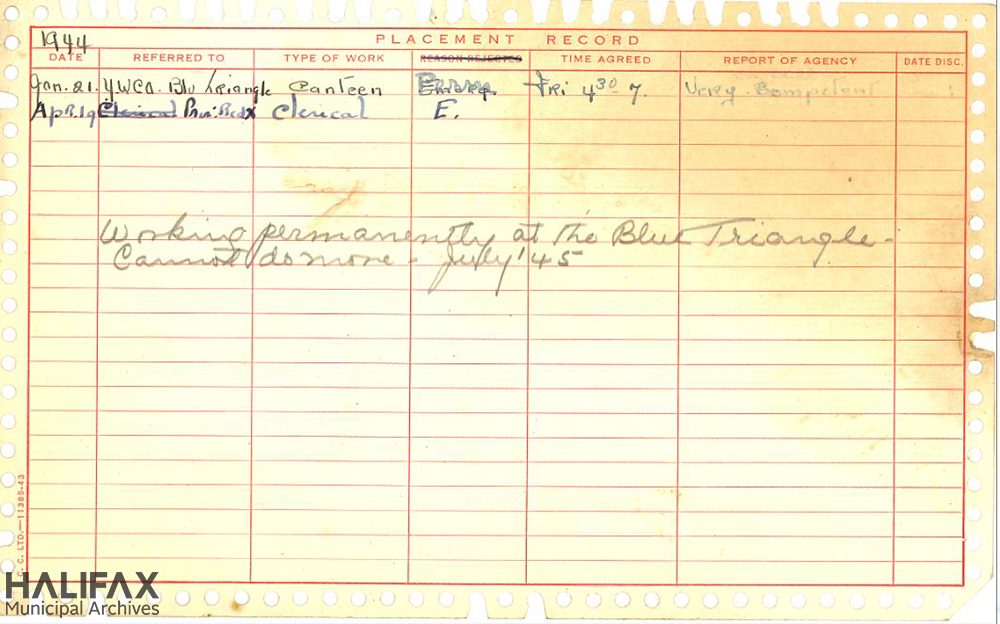 Sample placement card for WVS – front and back, anonymized for privacy. CR43.2

Once assigned, each volunteer's placements were tracked on a Placement Card, providing a detailed history of her volunteer service. Note the use of a punch card system to easily sort by name, availability and services.

View a larger version of the anonymized Placement Card.

This donation was featured in an article in the Summer 2013 edition of the Argonauta: The Newsletter of The Canadian Nautical Research Society.

The WVS records are a compelling testament to the energy, community spirit, professional organization and dedication of civilian volunteers intent on helping with the war effort.

As well as documenting the exemplary services provided by the women of Halifax, these records are a treasure for genealogists. The registration cards list each volunteer’s name, education details, birth, religion, number of dependents, work and volunteer experience, while appended cards also give details of their placements.

Another rich resource for genealogists is the Directory of Households provided by the postal service presumably so that the WVS could send out mass-mailings. The directory covers the entire County and rural delivery routes for Bedford and Dartmouth, listing householders’ names and occupations, and identifying francophones.

Read about the experiences of Halifax sisters, Marion and Louise Keshen who served overseas with the Canadian Red Cross Corps .

Thank you to Leslie Pezzack for this informative addition to the region’s documentary heritage.