Curated albums of historical images ~ plus help us identify unknown locations and people! 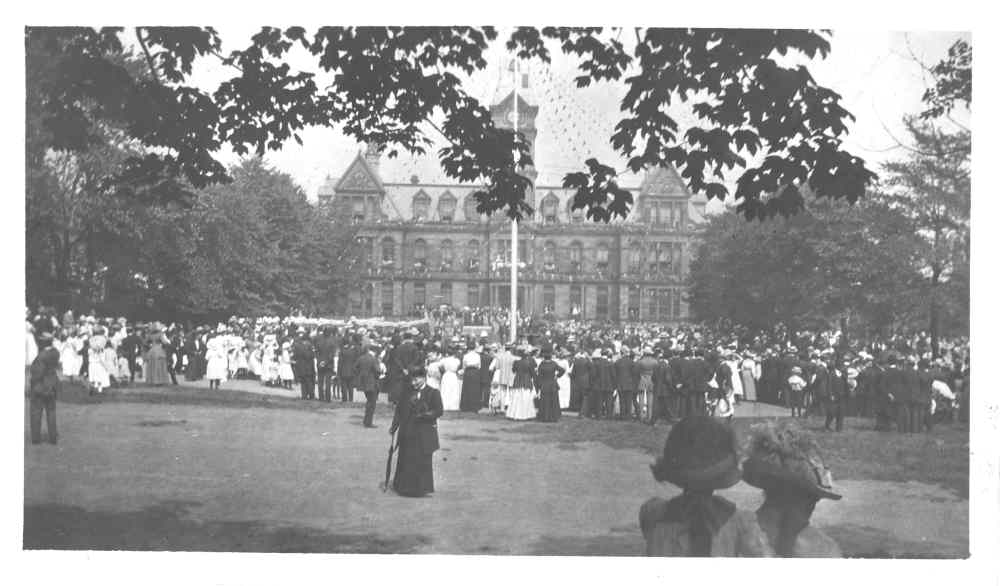 This unidentified event must have happened between 1890, when the flagstaff was first raised, and 1905, when a fountain was constructed where the Cenotaph now stands. Contact us if you have any clues to the nature of this event. John & Beatrice Alley photograph, HMA CR16-84. 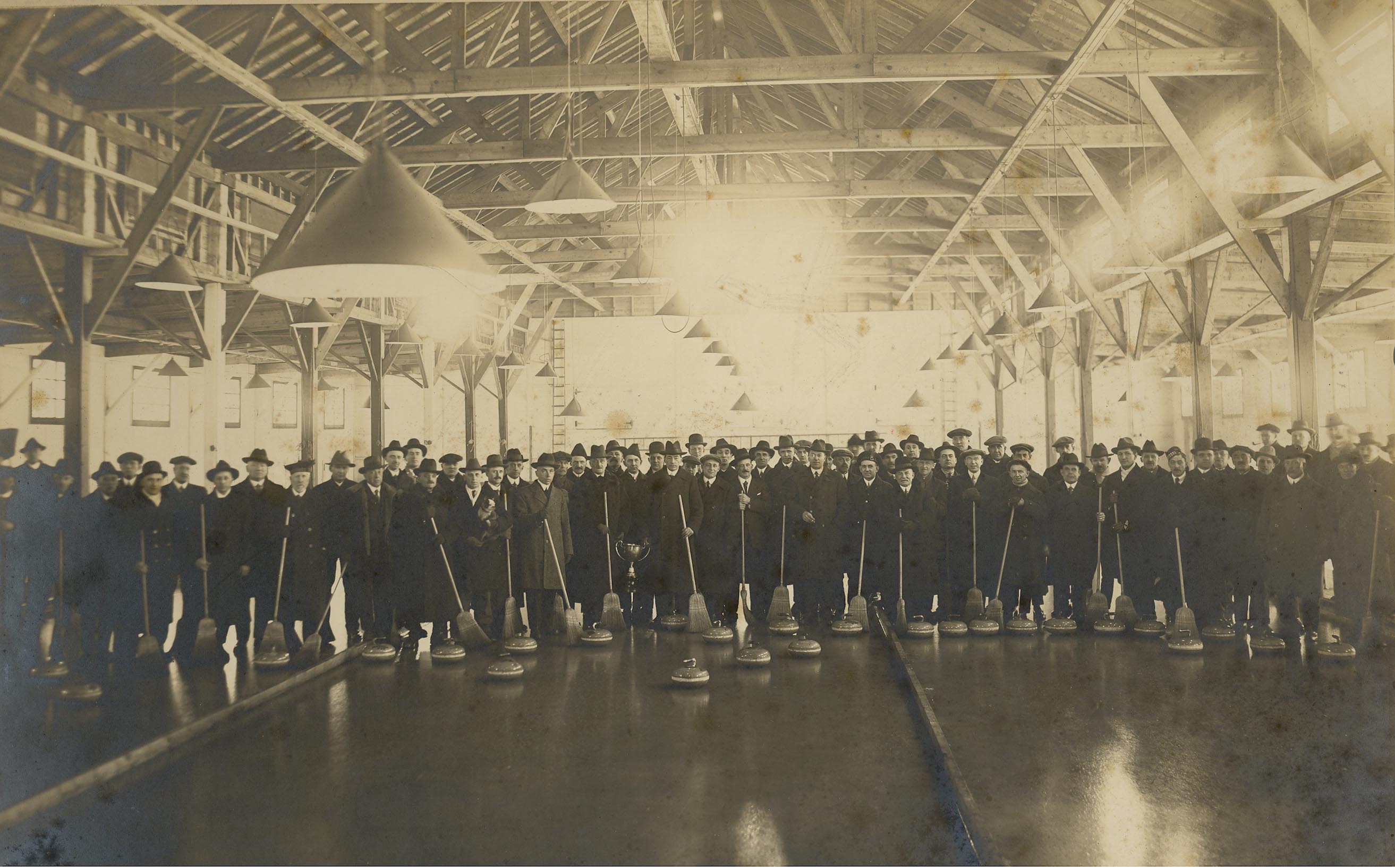 This photograph by Commercial Photo Service, Halifax, shows the winning team of the 1920 Dennis Trophy at the Mayflower Curling Club. Donated by Marilyn Moore. HMA CR6-029

This photograph shows the former City Market and Police Station, ca. 1949. The view from Citadel Hill also looks down Duke St. to show now-demolished buildings just down the hill, on the current Scotia Square site, and ferries crossing the harbour. The Halifax Police Station moved into the Market Building ca. 1953 from its cramped quarters in City Hall. Donated by Elizabeth Publicover. HMA CR6-007.1 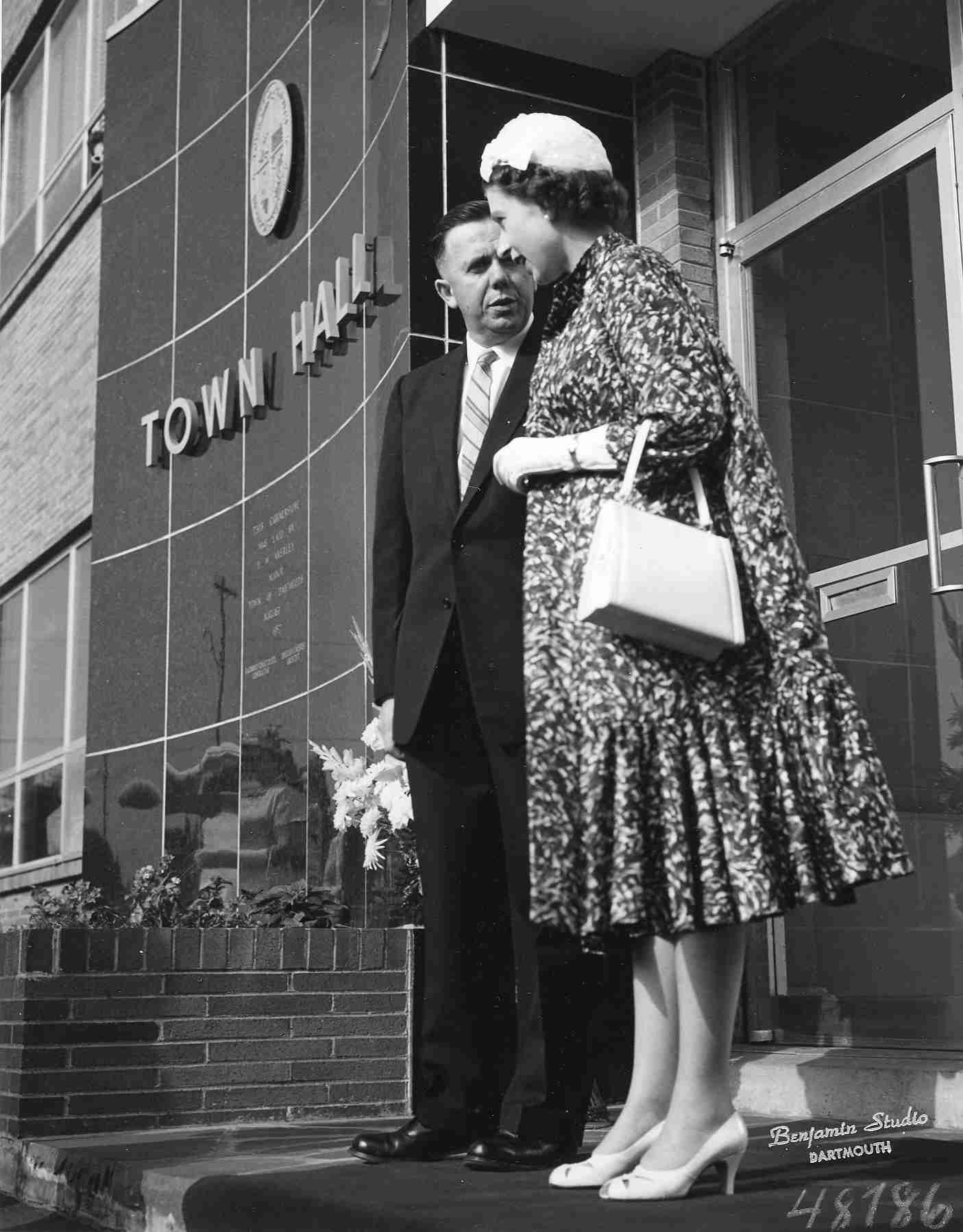 HRH Queen Elizabeth II ended her 1959 Cross-Canada tour in Halifax/Dartmouth. Photographer Allen Benjamin noted in a letter to the Municipal Archives that as he was documenting the Royal Visit it was obvious that the Queen was pregnant with her third child (Prince Andrew), but that no public mention was made until she returned home to make the official announcement.

Halifax Municipal Archives has several more photographs of the 1959 Royal Visit from the Dartmouth Clerk's Office and the Halifax Police Department files.

An interesting footnote to the Royal Visit photograph is that after the Municipal Archives contacted photographer Allen Benjamin for permission to use this photograph, he sent us the Dartmouth Police Reserve badge he had been issued after the VE Day Riots in 1945.

Dartmouth businessmen were enlisted to protect their property with the approach of Victory in Japan. Benjamin tells the story of how they turned back rioters closing in on the Dartmouth liquor store. The Chronicle Herald reported on this interesting story in the June 21, 2010 issue ("Dartmouth’s force grew after VE-Day riots"). 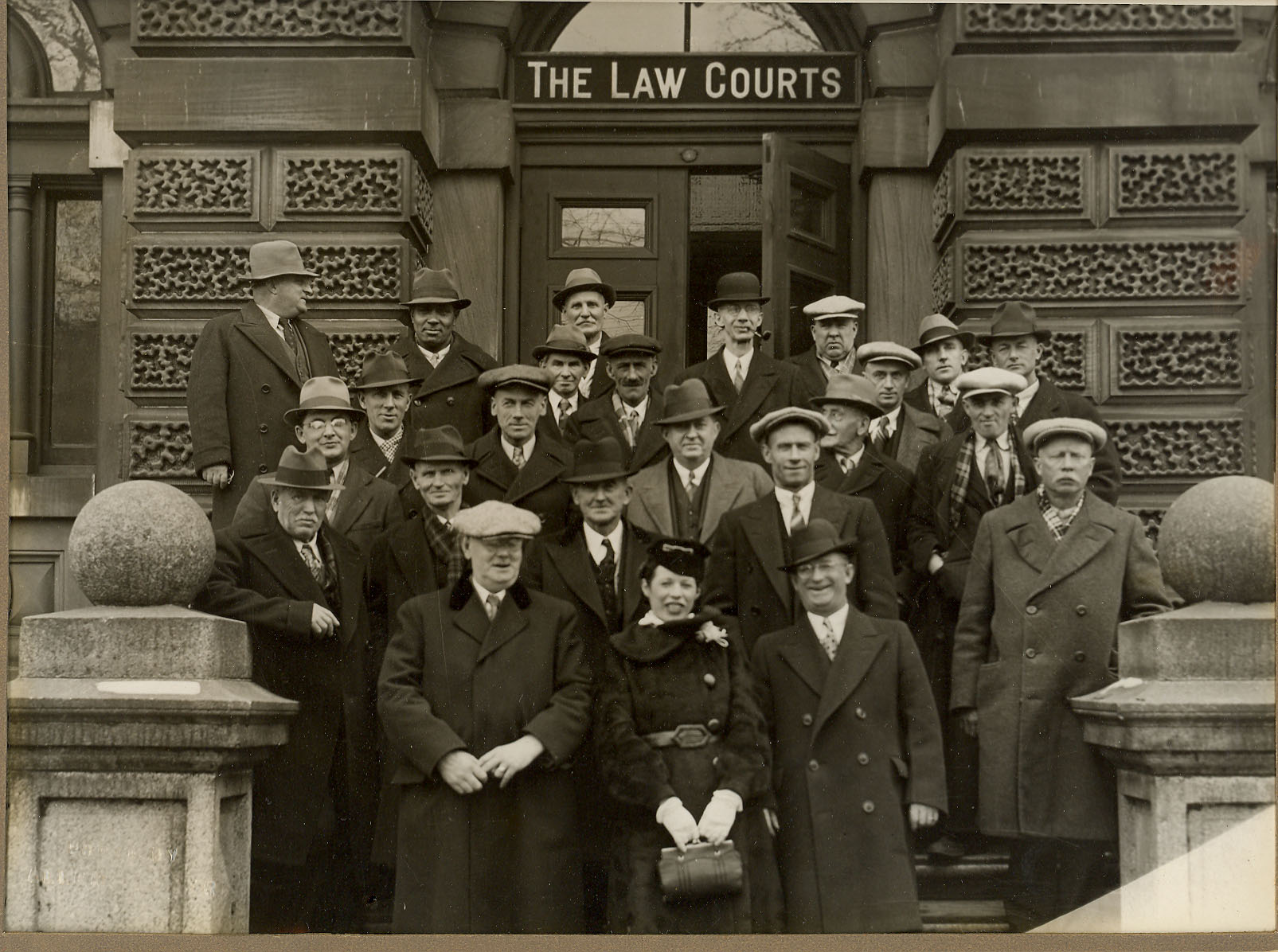 Mary Theresa King, the first female municipal councillor in rural Canada, was elected in 1938. Miss King represented District 27 on County Council until retiring in 1950, then reoffered to serve again in the 1950s and 1960s. In this photograph, Miss King is pictured front and centre among her fellow County councillors on the steps of the County Court House on Spring Garden Road, (where County Council met), late 1930s. HMA 312-1F-010 (Allen Fraser).

The City of Halifax elected its first female alderman, Catherine Maclean Sullivan in 1934. Mrs. M.T. Sullivan represented Ward 3 until 1940. Historically aldermen sat on city councils; municipal government for towns and counties were comprised of councillors. Our Women in Municipal Politics lists all the females elected in the Halifax region.

Discover these important facts and more about the 1800+ individuals who have been elected to serve on Halifax region's municipal councils from 1841 to the present in the Listings of Elected Officials. This list names all mayors, councillors and aldermen in the municipality/ward/district they represented. Search for your ancestors; see who represented your district 100 years ago; find out who all those streets in Burnside are named after. 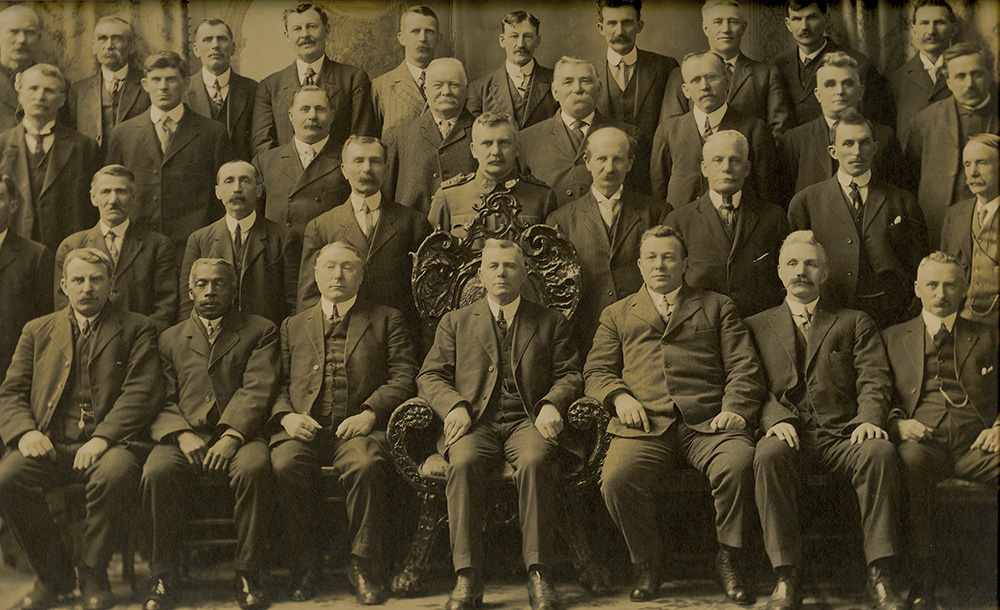 George H. Diggs represented the Preston District (#30) on the Halifax County Council from 1908-1917, and again from 1920-1930. In this 1916 group portrait, he is pictured in the first row, second from the left, or second to the left of Warden Charles E. Smith, seated in the ornate chair. In 1899, the district of Preston elected the first African Nova Scotian to public office, Councillor Thomas Johnson, who continued to serve until Diggs replaced him in 1908.*

George Diggs was the second longest-serving councillor in the Preston area, next to Allan W. Evans (1931-1961), and followed closely by Wayne F. Adams (1979-1994), who went on to become the first African Nova Scotian member of the Nova Scotia House of Assembly.

In the City of Halifax, the first African Nova Scotian alderman was Graham Downey, elected in Ward 3 in 1974.

The Municipal Archives holds many County Council photographs. Unfortunately, we have not yet discovered a photograph of Thomas Johnson, first African Nova Scotian County Councillor.

Halifax Municipal Archives acknowledges the financial support of the Government of Canada through Library and Archives Canada to assist with processing of County of Halifax records.

Queen Elizabeth High School: A Beginning, an End, a Re-Growth 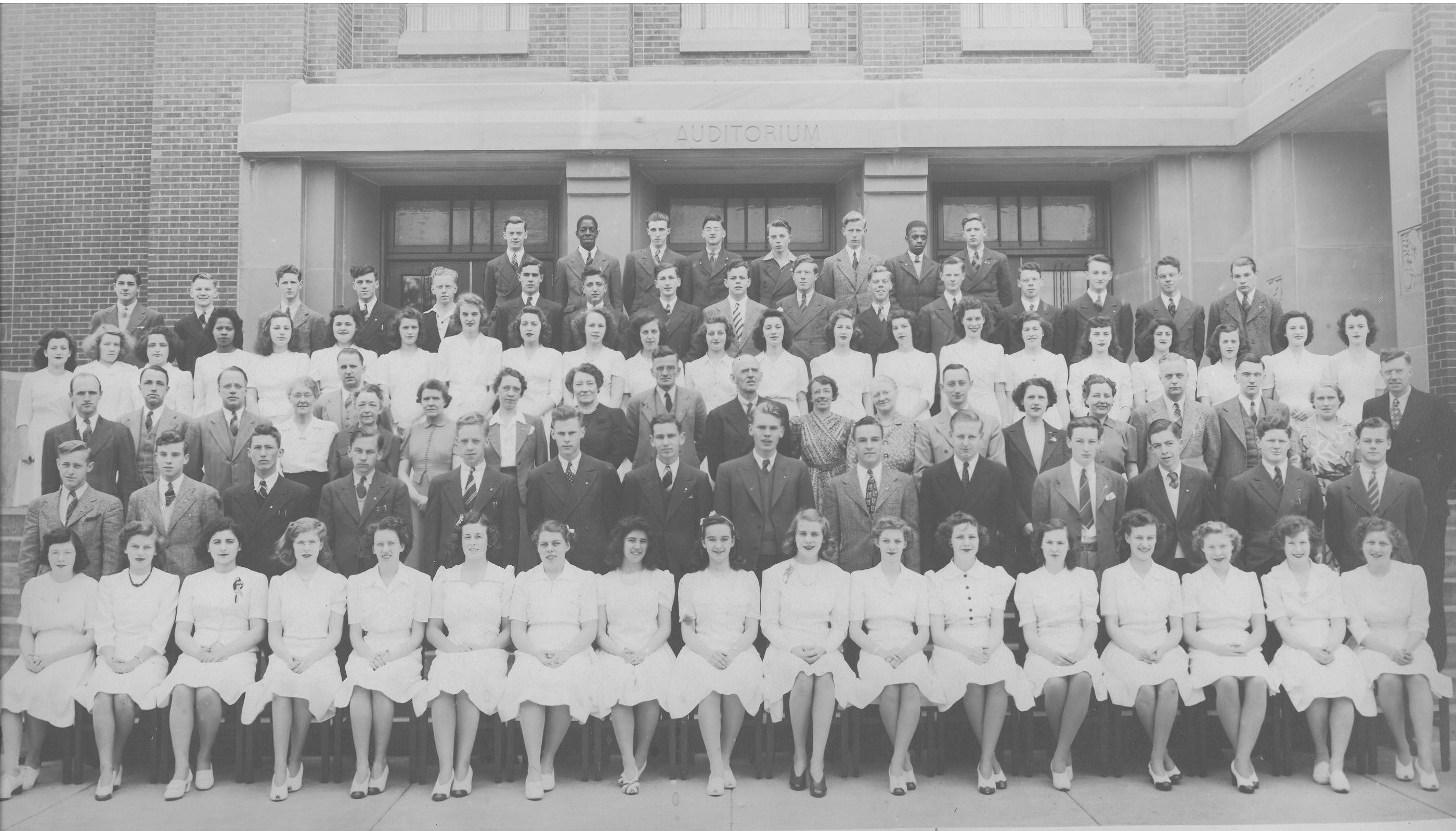 The Municipal Archives has some other QEHS material donated when the school closed.

Halifax Public Libraries holds the QEHS 50th Anniversary booklet: "Queen Elizabeth High School 1943-1993: 50 years!” as well as the "Elizabethan," the school yearbook, 1943-2006. School records are held by the Halifax Regional School Board; however the Municipal Archives has the Board of School Commissioners records which would have considerable material about Queen Elizabeth High School. 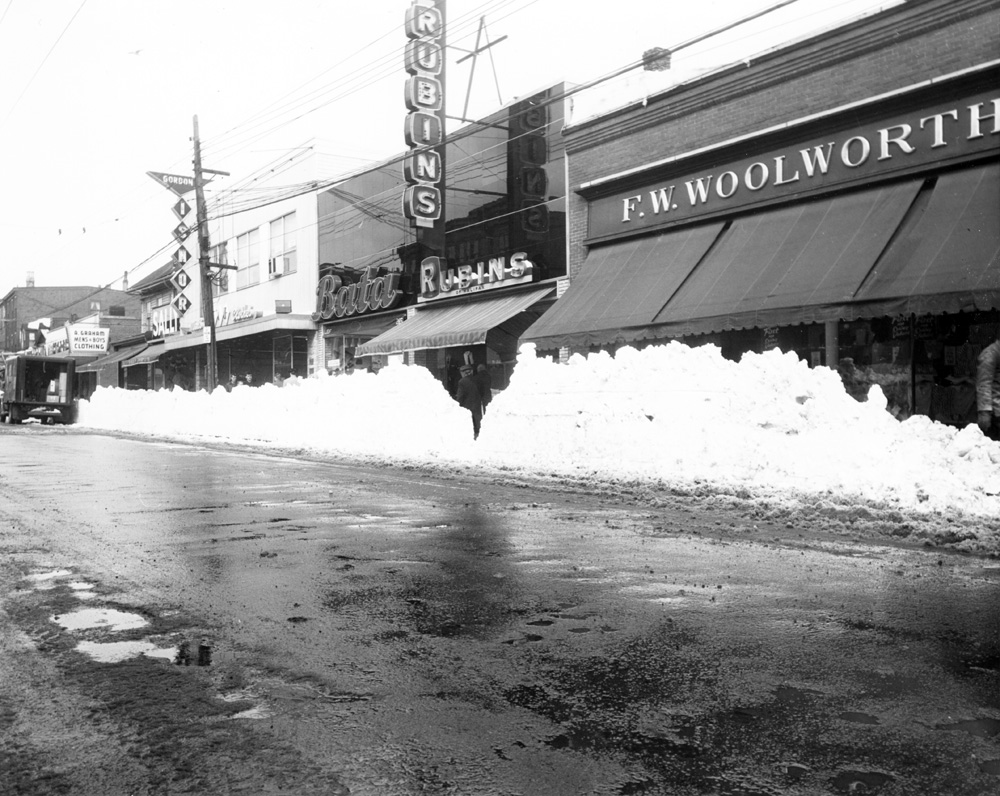 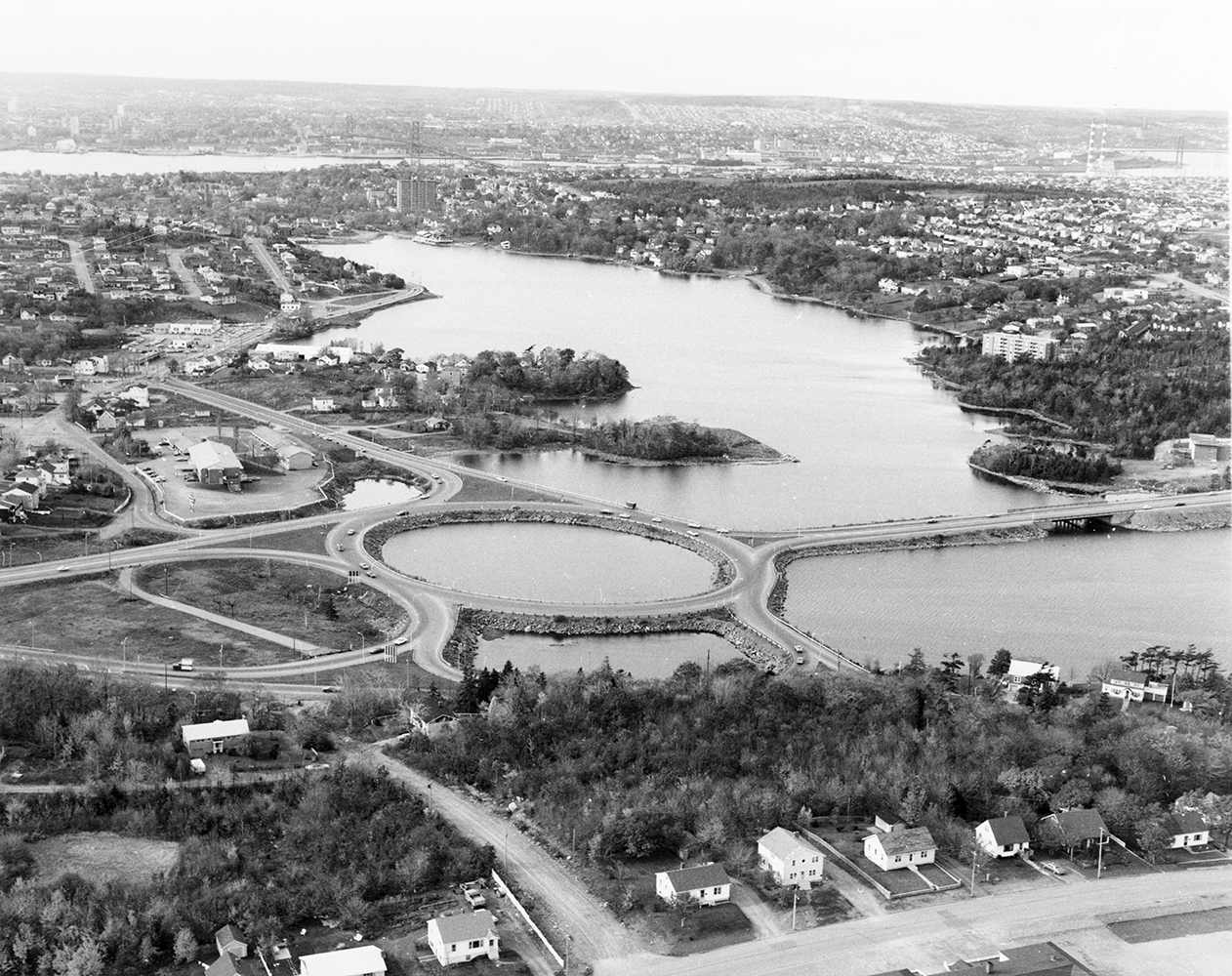 The Mic Mac Rotary was built by the Province of Nova Scotia in the early 1960s to provide a more efficient interchange for Highway 111, Route 318 (Braemar Drive/Waverley Road) and Trunk 7 (Main Street/Prince Albert Road/Graham’s Grove). The Rotary soon became infamous for its poor traffic flow, inspiring much rush-hour rage and the Bryson-Lyson song "Mic Mac Rotary Blues" (Solar Records, 1982). The Mic Mac Rotary also inspired a Scottish country dance! The Rotary was replaced by the "Parclo" partial cloverleaf in the early 1990s.

This Atlantic Air Survey photo from the mid-1970s looks west down Lake Banook towards Halifax Harbour. The Rotary was named after Lake Micmac (bottom right in the image), which was partially in-filled to accommodate it.

These are some of the more than 1,000 slides that the Archives processed in 2010 from images taken by Tourism Halifax to promote the City from 1970-1996. The series also includes photographs of special places like the Common, Brewery Market, Visitor Information Centres, and special events such as Mardi Gras, Natal Day, Buskersfest. These images document how much has changed in Halifax even in the last decades. 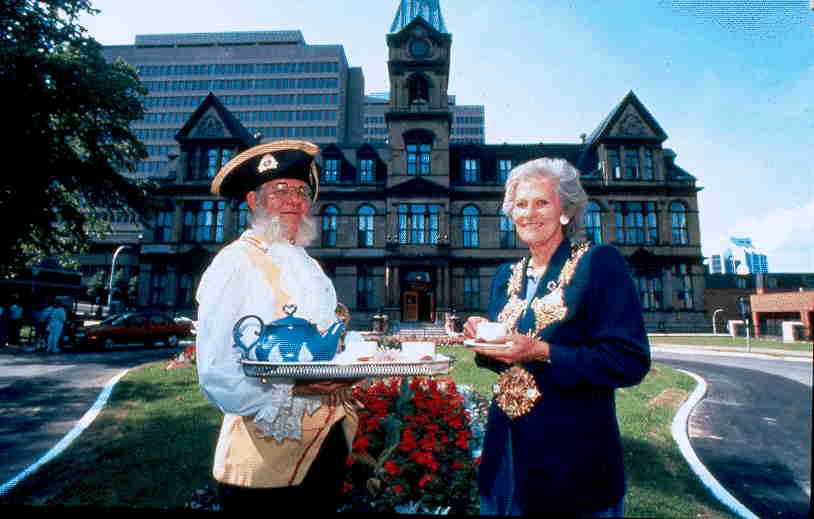 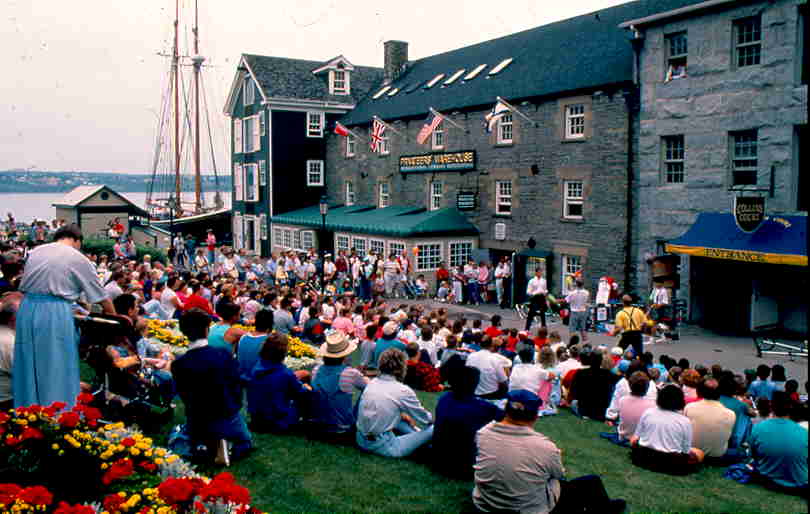 This project was made possible through the Provincial Archival Development Program offered by Nova Scotia Tourism, Culture and Heritage. 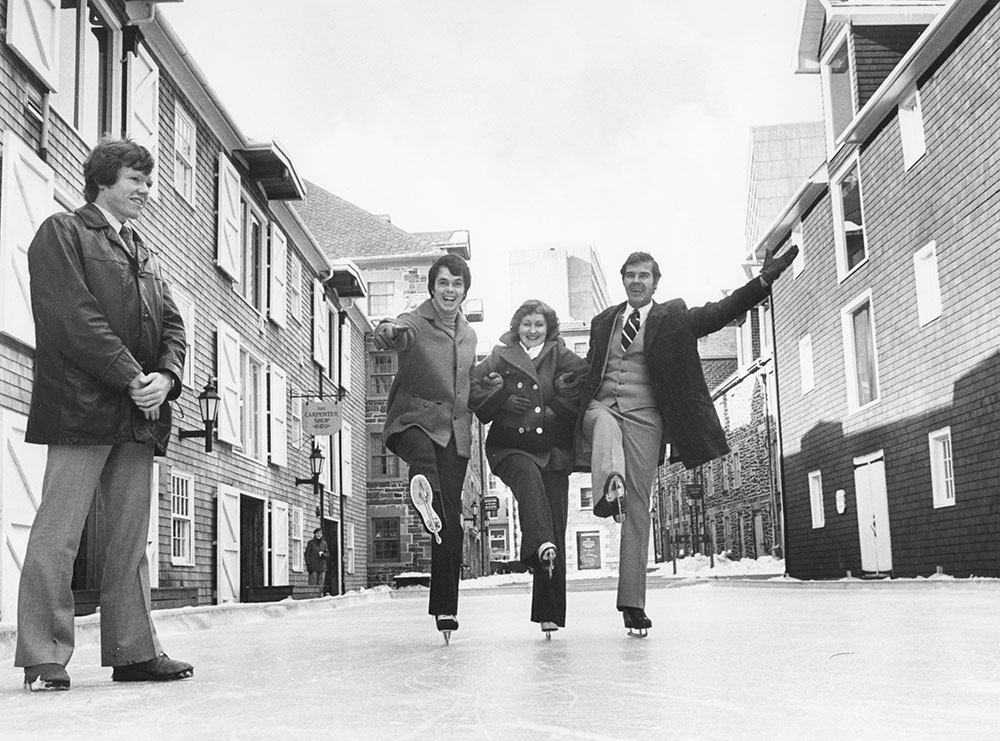 Outdoor skating has been a favourite pastime in Halifax for many years, dating back to the late 1800s when the Starr Manufacturing Company began producing some of Canada’s first skates in Dartmouth. Municipalities have organised community skating events at the Frog Pond, Lake Banook, Chocolate Lake, and Bedford's Mayor’s Skate at Paper Mill Lake. The City of Halifax even had a small skating area at Historic Properties!

These photographs form part of a large collection of Recreation Department photographs (series 102-106-1) documenting recreation activities and facilities throughout Halifax. 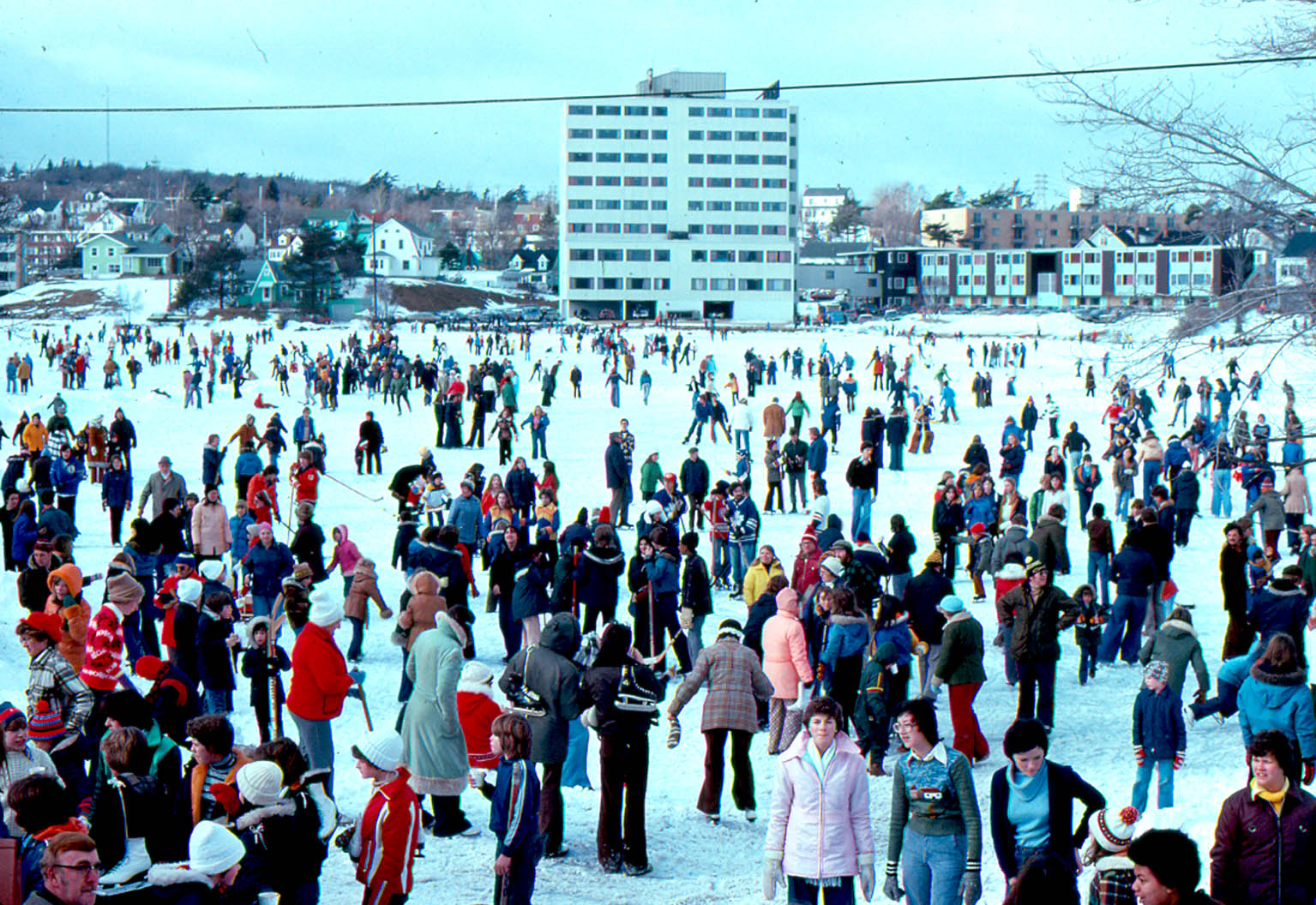 Pam Collins (1928-2017) was a founding member of the Heritage Trust of Nova Scotia and the wife of heritage activist, historian, educator, and writer Louis William Collins. With her husband, Collins was heavily involved in Halifax and Nova Scotia heritage communities, advocating for the preservation of heritage buildings in Halifax’s downtown and waterfront.

The Collins’ were a dynamic team; Pam photographed and organized the thousands of slides that Lou used in the many lectures he gave to visitors, schools, and groups. In 2017, the Municipal Archives received and processed over 4,000 of Pam’s slides and prints, which document significant architectural features and buildings in HRM as they were in the 1960s to 1980s. They are also an important addition to the Lou Collins fonds which Pam donated to the Municipal Archives in 2010.

Collins’ images provide a record of changes to Halifax's built environment, and help preserve small details of the City as she knew it. The main subjects of the photographs are homes and buildings in downtown Halifax, churches, views from Citadel Hill, the waterfront and coastal areas, demolitions or restorations of Halifax buildings, the restoration and opening of Historic Properties, and events and tours attended by herself and Lou. There is also a series of images of locations outside of HRM, as the Collins’ interest in history was far-reaching. Explore listings of Pam Collins’ photographs: CR 30K 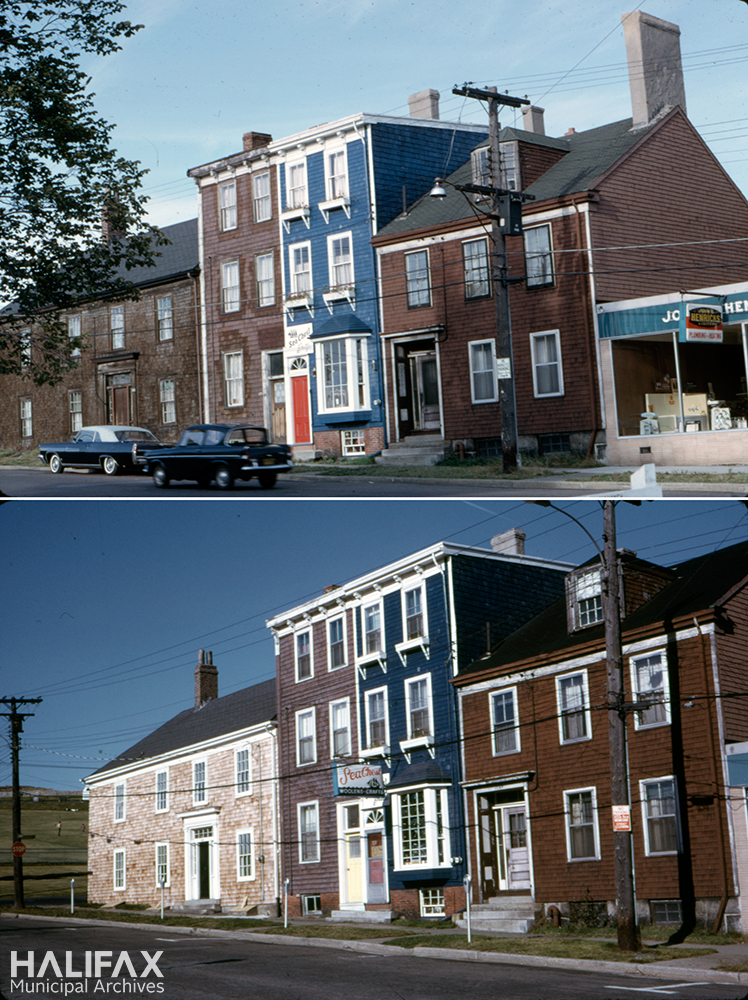 These images capture Bollard House on the corner of Dresden Row and Sackville Street before and after its restorations in 1964 and 1973. Bollard House, a designated heritage property in the Schmidtville area of Halifax, is believed to have been built in the 1840s. The uniquely shaped house--described as both "triangular" and five sided--was noted as the subject of curiosity and rumour by Lou Collins in his 1975 book In Halifax Town. In the 1960s, the aging house was occupied by the Bollard sisters, whose ship-builder father had purchased it in the early 1900s. The "spinster sisters" remained there into old age in the 1960s, as the building fell into disrepair. By 1973, Bollard House had been purchased and restored by a local antiques dealer. As of 2013, the home was reported to be undergoing maintenance under a new owner.

Images in this series are not yet digitized, but researchers may request digital copies from archives@halifax.ca.

Halifax Municipal Archives acknowledges the financial assistance of the Government of Canada and the Canadian Council of Archives to the Young Canada Works at Building Careers in Heritage program, which funded the work of an Archives Intern on this project.